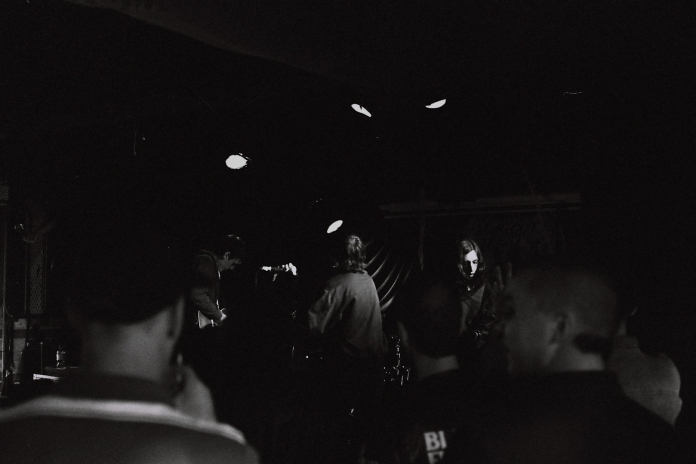 Since forming in late 2013, Sydney-based quartet Orion has grown to mean a lot to people. The group makes accessible, powerful and sometimes danceable pop songs. Uplifting melodies and synced bass and drum machine blend with dark undertones of guitar and morose keyboards. It’s unsettling at first, but the delivery on every track is unabashed, and they’re a band unafraid to connect with human emotion.

Orion is made up of Yuta of MOB and Oily Boys, Kerem, aka Dizzy of Oily Boys and Low Life and Sarah and Chris, both formerly of Whores. While Orion invites little comparison to any of these bands, there is a familiar underlying aggression to their brand of new wave pop. The group’s live shows are sure to break out into a pit of undulating bodies, some heaving, some dancing, many embracing frontman Yuta as he struts around the stage.

I caught up with Yuta, Dizzy and Sarah at the Huntsbury pub in Petersham to talk about pop, emotional maturity and the flicker of a future. The group is currently working on their first LP – a follow-up to last year’s demo cassette through Paradise Daily.

Correct me if I’m wrong, but this is the first straight pop band that any of you have been in before?
Sarah: Indeed.

Yuta: Pretty much. I was in one when I was 16 with Al (Haddock). It was rubbish. That’s actually when I first met Sarah. The band didn’t really work out, we didn’t really know any better back then. Everyone’s in shit bands when they’re young.

Was it hard to write pop songs initially, given that you’d never really done it properly before?
Y: Yeah it was – I think with pop music, you need to experience a lot of different emotions in order to write a good pop song.

Is that to say that your other bands were less rooted in emotional experience?
Y: Definitely less so than Orion.

S: I think the emotion was just different. In our early twenties I think a lot of us felt like we had no future so all the music was really bleak, mostly just grim shit. Now I guess the idea of a future is growing.

Dizzy: I dunno – aren’t we all still making that same fucken harsh music that we were before?

Y: Totally, but now there’s just like a glimmer of hope in it, I reckon.

D: I think now we’re just able to write good songs because we know what’s good and what’s not, so we don’t put out trash or anything.

So does Orion represent an evolution in songwriting for all of you?
S: I guess we’d just never tried this mode of songwriting before.

D: I think we just honestly have better taste now. I think if we all tried to be in a pop band in our early twenties, it would probably be pretty bad.

Y: Yeah, because we’ve played in other punk and hardcore bands before, I think now we just have a much better approach to writing pop music. Orion is just a different dynamic to any other band I’ve been in.

D: Just being in this band, it’s a much more communal thing – there’s way less ego in Orion. I mean, I suppose there is ego in this band but we don’t let it get in the way of anything.

Was the goal to try something different when starting the band?
Y: It all happened pretty naturally. Me, Sarah and Chris always talked about starting a pop band. The song ‘Sexy Alien’ came from a jam between me, Sarah and Chris – it was pretty much just us sitting in a room writing songs that captured what we thought pop was. Then I had a jam with Dizzy, and that’s when we wrote ‘Church Bells’, and then we figured we’d all just combine and start a band as we were all writing music that related to each other. It was never a conscious or set thing to start Orion.

D: I think we played our first show as a two-piece while Sarah and Chris were out of action. But it was always the intention to have them play.

Your music obviously draws on a lot of other much-loved bands. The instrumentation, particularly the bass lines and the drum machine compliment each other pretty precisely. Which came first for Orion, the sound or the idea?
D: I think the drum machine was actually just a stopgap for a while. We always said ‘Oh yeah, we’ll get a drummer some time’. We were debating it for some time, and then we all ended up deciding to go for the drum machine. People always asked us ‘When are you getting a drummer?’, ‘Uh…well maybe we won’t.’

Y: I definitely don’t think about the sound that often, like what sound we’re gonna make or what goes where – it all just happens naturally.

D: It’s never contrived or anything, never too much forethought goes into any of it.

Y: That’s why every Orion song sounds different I think. Like there’s a strong difference between ‘Red Lights’ and ‘Turbulence’.

D: We want to be able to write in a lot of different styles. We never want to box ourselves in to any particular mode or genre. Not to say that the past was great or anything, but I think bands were much less limited on albums where they could do like ten different styles. It seems like nowadays bands get boxed in much easier like ‘you’re this kind of band, so you’ve gotta subscribe to this style’, and it’s hard to move out of that.

Yeah, funny you say that, I remember at Maggot Fest last year during your set, some punter shouted out ‘Fuck the ’80s!’ Do you ever feel pigeonholed as an ’80s style, new wave bad?
Y: Definitely – but they’re fucken ignorant.

S: For sure, but we’re not ashamed to be heaps of shit from the ’80s, we all love it. At the same time I’d like to think that we have our own take on it.

Y: People are always gonna look back on music from the past and it just so happens that the ’80s is where our music fits best. That guy who says fuck the ’80s is probably into millennium hardcore [chuckles].

S: Pop music is like a language – you draw on certain things because that’s just the mode of it, that’s the medium that you’re working with.

D: I’d say one thing about making pop music and I think why Orion formed when it did was mainly because we’re much more confident musically now to make pop music. When you are a bit less confident, and I’d say we all definitely were, it’s hard to make music for listeners to ‘have a great time’ to. I think that definitely takes a bit of bravery.

Y: I’m much more nervous about making pop music than any other type of music.

Is that because you feel there’s more honesty in it?
Y: I think so. I think there’s a lot more personal shit coming out of you in pop. Personally, I definitely have never ever sung with as much emotion or aggression before. When I was younger I was much more shy.

Do you guys find it challenging to perform live in Orion sometimes?
S: I do – I’m pretty fucken socially anxious so yeah, it’s pretty hard. I’ve gotten better at it with practice, but there’s no way I could ever sing.

D: I wouldn’t wanna do what Yuta does. It’s easy enough to hide behind an instrument.

Y: It was hard at first. But there was definitely one point in time where I was like ‘fuck this – fuck feeling anxious, I should be more confident in our songs.’ Once that happened, it became much easier. The more we played the more comfortable we became.

D: I don’t know if I’ve ever been nervous playing in Orion. I’m not too sure how Chris feels but he has his back to the audience mostly.

It’s palpable that when you see an Orion show, you really feel the emotion and passion emanate from the live performance. Audiences get really rowdy and into it.
D: Yeah it’s really cool to see people express emotion and respond to music you put out there.

How satisfied with your demos were you?
D: Very happy considering the amount of effort that went into them. It was all pretty rushed, and Lawrence [Hall] did a great job of making that shit chime. I mean, it’s definitely not great, and all of those songs are gonna be on the LP, and they sound so different now.

In what sense do they sound different?
D: The vocals are a lot better, there’s new drum tracks. Everything has a different feel to it now.

Y: When you get used to a song, you can play around with it.

I see you’re playing Maggot Fest again in Melbourne. How do you find Melbourne audiences respond to your music?
S: They were very receptive, and maybe initially I thought they wouldn’t be.

D: I think it almost embarrassed us. We had this preconception of Melbourne crowds and how they’d respond to our music and I think we were all totally proven wrong.

What’s been your most memorable live experience?
S: They’re all a blur.

Y: The Birdrib one was pretty fun. Even though we sounded like absolute shit.

S: Ha, yeah that was awesome. Christian (Low Life) just like Godzilla’d it on stage and knocked over the synth and all the shit – those are definitely the mad ones. The one’s where everyone gets really raucous and it doesn’t even matter so much what you play.

D: Playing a great set to people who don’t give a fuck is actually nowhere near as good as playing an absolute horror show to people who are really into it.

Y: The funnest ones are probably the ones where we don’t complete a set for whatever reason that might be.

A lot of people seem to be quite enthusiastic about Orion. Do you feel that you’re filling some sort of void in Sydney music?
Y: No, not at all.

S: That’s definitely not something I would have ever thought about. We just wanted to fill our time and do something fun with people we like and just do some shit musically that we’ve never tried before.

Orion’s demo cassette is sold out, but it can be downloaded here.