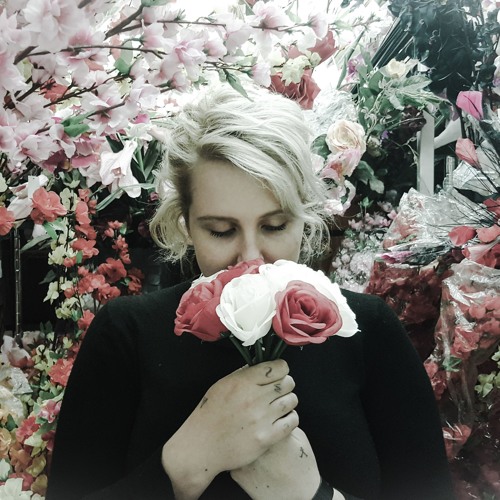 The first time I met Kahli Carter we were in a friend’s kitchen. She was baking an upside-down pear cake, deeply lost in her cooking as an overwhelming symphony cranked through the speakers of her red portable radio. She gave me a quick hello and continued measuring flour and meticulously slicing pears in concentration. I noticed that she would smile, knowingly, every time a new song was announced on Classic FM. When the cake came out of the oven she left the room to let her confection cool. When I finally had a slice it was the best cake I’d ever eaten.

Kahli Carter is the bass player in Grotto – a celebrated scum-punk band from Melbourne with very little online presence and a solid following. She’s also in Cop Date, a grindcore and self-defined cop crust band who wear police outfits and throw donuts at their audience while blasting fast paced songs about Tinder dates with cops. I’ve seen Grotto in a squat and Cop Date in an abandoned sewer. Both times I smiled and pushed, lost within the catharsis of the pit, thinking about that upside-down pear cake.

One night, trapped in a Soundcloud vortex, I came across Kahli’s personal project. Coming from a background of heavy and industrial bands including Caught Ship and The Angel and Baby Chain, I was expecting discordant overtones or foreboding industrial noise. Instead, I found melodies: soothing waves of symphonic virtual pianos, an array of synthetic instruments weaving elegant arrangements, and a song labelled ‘#evilenya’. Kahli’s songs are impressive compositions that feel intricate yet simple, graceful yet obscure. Seamlessly, her music feels youthful and modern, despite drawing on both new age and classical music.

Originally from the Sunshine Coast, Kahli was captain of her school’s band throughout high school. She wagged most subjects to play the clarinet, oboe, and to teach herself the flute in the music block. After high school she moved to Brisbane where she joined Caught Ship on synths. In 2009 the band moved to Melbourne, where they produced the album Symmetricult before Kahli left the band. Now residing in West Footscray for the past four years, Kahli welcomes me into her sun-lit house to talk about her work. 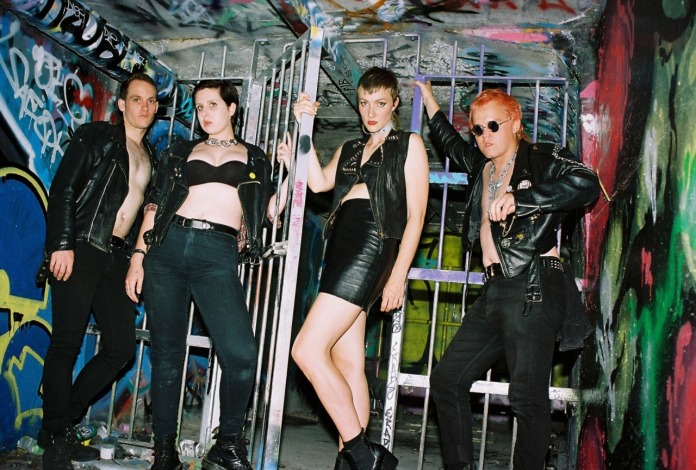 What’s the intention behind the compositions on your Soundcloud playlist “To Sleep To” (#DeepSleep) ?
The sleep project came about three years ago. I was in between musical projects and I wasn’t participating in anything exciting or challenging at the time, so I decided to tackle Logic and create something that I would like to listen to. This was also a time when I was having a lot of anxiety issues and problems sleeping, I was awake at all hours. I knew a lot of my friends were going through similar problems including panic attacks and insomnia. I mainly wanted to make music with the purpose of creating a relaxing environment for myself and others. I wanted to create melodies that were not catchy – nothing that would get stuck in your head because that’s not very relaxing.

How do you go about creating melodies that are not catchy?
I keep it quiet and watch the dynamics – nothing too peaky or harsh to the ear. I try to make a nice, big, calm, floaty wave that’s a simple A B A structure. A wave with a soft resolution that leaves you in the same spot where you started.

Is your emotional drive when composing often derived from anxiety, sadness or exhaustion?
No. It’s purely melody-based. The writing process starts when I have a melody pop up in my head and re-appear whenever I pick up an instrument. Sometimes I stew on it for a month or for years, but eventually I need to get it out of my system – the melody, not so much the emotion. I guess I generally can’t see the emotions behind the songs until much later down the track when I re-listen to a song. When I listen to the Sleep tracks I immediately remember the times I was smoking a lot of weed and taking a lot of dexies. I can listen to it and remember exactly how I was feeling, how long I was awake for, how erratic I was. I don’t think of emotions when I compose, but it’s easy to see them in retrospect.

I guess – since your music is about creating a solution for anxiety, rather than directly expressing anxiety – it is important to keep emotions at bay.
I don’t know if I see it as creating a solution. My objective is to not cloud people with my emotions, I want for others to have the ability to think for themselves about how they feel. If anything, I want to create the background for them to be able to figure out what’s going on in their lives, I don’t want to put my shit onto others, really.

Your compositions have strong new age and classical music connotations, yet they feel very modern – how much of this is a conscious effort?
It comes naturally. I’ve never really considered my music to be ‘new agey’ but I suppose it is. I guess it doesn’t bother me what my songs are labelled as. You can play my stuff in a yoga class if you want to, that would be lovely. I mean, it’s never really going to sound old because I don’t use traditional instruments, I use my computer. Except for a song where I play the flute, I only use soft synths and I try to make it sound as organic as possible while using computer-generated sounds of violins, choirs and pianos. Part of me wants it to sound as organic as possible but then again I like synths so much I always add a touch of purely digital sounds.

Synth compositions and heavier music– what’s the best part about each of them, for you?
In terms of performing in Grotto and Cop Date I like to actually play instruments live and I like yelling. The nature of my personal compositions doesn’t really allow for a live show because it’s meant to be listened to at home, with your headphones on. There’s no point in going to a live show to feel sleepy or to calm your anxiety. Playing in bands also means that no matter how bad a show goes you have your bandmates to support you and this ‘team spirit’ also applies to the songwriting process. With my personal compositions I like that they are my own conceptions, they are often melodies that I’ve had inside my brain for a long time so each song feels like a little melody child. 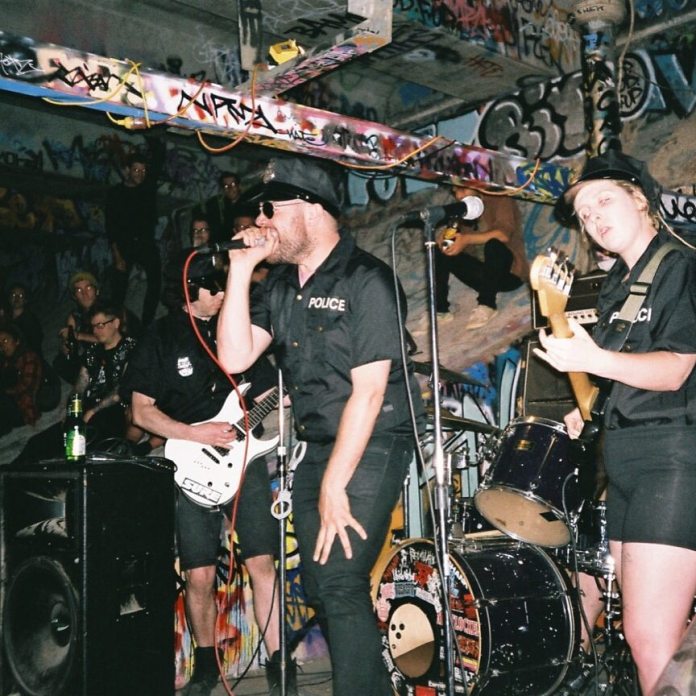 Do you choose to play bass in grind and punk bands because of the live aspect?
As a musician I need to wag my wiggles out somehow. I need to have some form of physical expression when I perform my music. I don’t know what I would do with all my energy if I couldn’t play live in grind or punk bands. It’s definitely the live aspect that I find wholly satisfying. If it’s not about the live aspect of those genres then what’s it about? You can listen to punk or grind on your iPod or at home but it’s not the same as watching it in the flesh. I mean, the crowds that go to those types of shows will want to fucking move and see you move, they will want to see your energy throughout your short 15 minute sets. They are not there to sway, they are there to feel a sense of catharsis through movement.

Punk and grind definitely have a better guarantee that your audience will physically engage with your show. How did it feel to play in a band like Caught Ship, which was more experimental?
With Caught Ship it was a Russian roulette – you never really knew which nights the crowds would engage and which nights the crowds would be dead. The thing is, if the crowd is silent and still then it’s too daunting for you to move as a musician, you just freeze – you are afraid of being judged. I also think an important aspect from my time in Caught Ship is that I was playing the synths, not the bass. When you are playing synths you are much more restricted in terms of motion and your performance is limited. You can’t really move the instrument with you, you’re sort of stuck in place.

It wouldn’t be as liberating to play a gig where you don’t know if the crowd will positively engage or be dead quiet, particularly if your motivation is physical expression.
For sure, being too cool to move is endemic in a lot of capital cities, I’ve noticed. It happened [with Caught Ship] in Brisbane when we lived there and also in Melbourne when we moved here. In retrospect, I was never really comfortable on stage when I was just playing synths for Caught Ship or The Angel and Baby Chain, but that was also influenced by the fact that I wasn’t fully comfortable in my own person. I have gradually become more confident in my own skin and as a musician – I guess it all works collectively in that respect.

What other genres would you like to explore in the future?
I want to branch out and do more beat-driven music. I feel like this means that I would like to do more pop-driven compositions, which would be a huge challenge because of its structure but I’ve always wanted to write pop music. I don’t know, really. I’m going to move to Mexico soon and I’m only taking my drum pad with me, so I feel like what will end up happening is that I will write mostly dance-y stuff. I would love to do that. 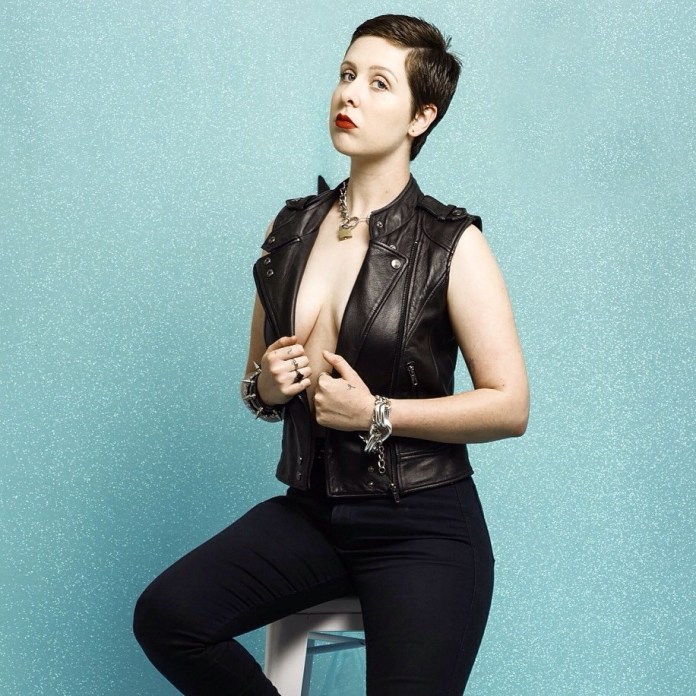