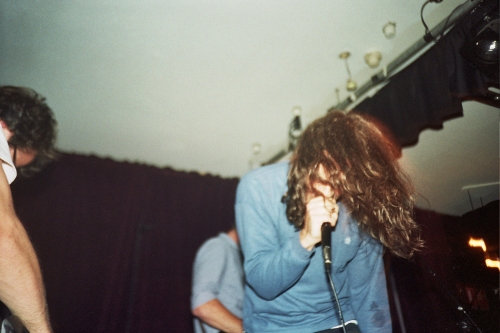 Velvet Whip exist in a realm of excitable catharsis and distorted reference points. Fronted by the shrieks and flaying hair of NUN‘s Hugh Young, the Melbourne four-piece are one of many recent punk and hardcore acts increasingly embracing the psychedelic realms in their otherwise direct shots of bitterness and distaste. It’s space-punk for the common nihilist.

‘Bronze Medallion’ appears on Velvet Whip’s second cassette on Cool Death Records. Young sounds like an unethically programmed android here, and his fierce backing gives way on multiple occasions to stretched passages of flanging nonsense. It’s a rush that matches their previous cassette on the same label and resulted in one of the more chaotic sets at last year’s Maggotfest.

Velvet Whip’s Bronze Medallion tape can be purchased from Repressed or your favourite online distro.