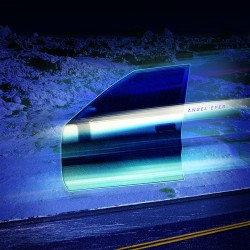 On Final Fare, Angel Eyes captures the docile, captivated sensation of being a passenger; of having an endless supply of landscape scrolling to one side. Minimally cinematic life rushing by, with no requirement for you to engage. Movement without expenditure. An unfolding of potential events. Random and unrelated input.

I’ve tried to formulate why Andrew Cowie’s music affects me for years now, but it’s a slippery thing. Sometimes I think it’s simply and unashamedly gorgeous and nothing else. That’s fine, isn’t it? But then when I’ve come close to accepting that idea, I listen again and think… well, it cannot be that simple. It’s true that many of the textures Cowie trades in recall sentimental ‘80s pop music. I’m thinking specifically Berlin’s ‘Take My Breath Away’: beautiful deep oranges; shimmering distant globes; sounds that impart a renewed appreciation for sentimentality. A world in slow motion with a liberal spread of lens flare. That Berlin song is beautiful. So is Angel Eyes.

But that’s the problem. Angel Eyes on paper is nostalgic. The textures here: the spatial disorientation, the chorus and reverb, the synths, the muted pop sensibilities… maybe you could file Angel Eyes in a section for unusually dour chillwave (take a deep breath) and be done. But at best you’d be selling the artist short and at worst: you’d be an idiot! Angel Eyes, in practice, is something ineffable. It’s something personal. You cannot relate. You’ll blaze your own path.

To me, Final Fare sounds like a city. Final Fare reminds me of depictions of Manhattan, or Sydney, or Tokyo, in 1980s films. Brief, wide pans across a bewilderingly modern skyline, at sunset or sundown. A still vision of perfectly curveless architecture that betrays no evidence of organic life. The bays and quays shimmer, the lights along busy roads glow, but it doesn’t look like actual life is happening there. A city from a distance resembles a monument. A monstrously ornate, fairy-lit, but otherwise lifeless monument. It betrays virtually nothing from afar.

But then when you’re inside it, you forget where you are: it’s not a monument anymore: it’s a labyrinthine, echoing, busy series of avenues and routes. It’s ugly and busy, but we’re accustomed to being inside it, and so the full extent of its still exterior grandiosity never registers. It’s easy to forget how weird this is: how dense we are, how high we scale and wide we reach, until you sit on a hill some several kilometres away. We are the barely comprehensible horror looming just over the horizon. And that’s what Angel Eyes always sounds like to me: like watching something immensely complicated from a distance with a distorted sense of time and movement. Likewise, Angel Eyes’ music is beautiful from the exterior, but try to make sense of it from the inside and maybe you may get nowhere, like me.

Final Fare is the most ‘song-oriented’ record that Cowie has produced, but these pop songs feel like crowded halls of mirrors. Distinct notes in melodies linger longer than they should, they press against one another and melt into accidentally non-melodic yet achingly luminescent textures. Often, it feels like you hallucinate the melodies here. Some tracks here, like ‘A Light Distraction’, recall watching human systems – pedestrian traffic, train line arteries – at such a speed that all movement resembles a permanent blur of shifting colour. Cowie has done this before, such as on his debut Dire Dish, but that record offered a more pastoral setting. Here, his songwriting has become more complicated and strange as a result of averting his glare to a city.

It’s only the sound that betrays this new focus though. Cowie’s lyrics have always been so obscured in the mix that a song about preparing shitty meals, such as on the title track to 2009’s Dire Dish, can sound unintentionally profound. That’s definitely a jarring contrast – the startlingly beautiful knocking head with the mundane – but I can guarantee that you won’t register this when you listen to Angel Eyes. I cannot, and probably never will, accurately decipher what this record is actually about. If indeed it’s about anything. And I’ve tried – that’s my job, right now.

The songwriting, though. Structurally, sometimes it feels almost inappropriately advanced, and arcane, next to the sonic associations it’ll inevitably conjure. Because there’s probably gonna be a lot of people who will conflate Angel Eyes’ music with all manner of conditioned, 21st century nostalgia, and the drowned inexact pop tropes that zeitgeist trades in, but I don’t feel like that’s applicable here. There are sonic parallels, but they’re consumed by the execution. Just listen to it. I challenge anyone to call this record nostalgic in the way we’re conditioned to believe music is intrinsically nostalgic in 2012. Final Fare may be nostalgic for a sensation, a personal sense of childlike wonderment, maybe, but wholesale periodic pillaging? No! Rationalise it on those grounds – give it a go – and you’ll fail. This music provides no context beyond what your imagination will arbitrarily conjure for you. It’s like taking the back seat and having no obligation to chat to the taxi driver, even when he takes flight. Don’t even congratulate the guy, when he’s hurtling towards the stars, and you didn’t even ask for this. Final Fare is docile, blissful receptiveness. At a time when virtually anything remotely strange is ‘weird’, Angel Eyes is legitimately, and beautifully, weird. It’s up to you.