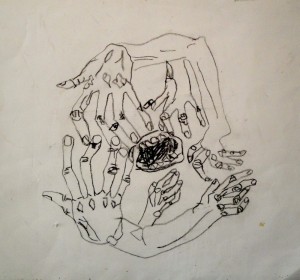 There’s an established continuum for the type of rock ‘n roll Degreaser trade in, but cards on the table: I’ve never followed it closely. To me, Degreaser’s new record sounds like Hendrix with all the benevolent and pleasant sensibilities forcedly syphoned out. In their place, delirium and debasement is injected. There’s a blues rock and psychedelic element about Degreaser that few people would deny, but a comparison to Hendrix still feels like drawing a long bow. But draw it I proudly will, if only because it’s like a horrid monochromatic inverse to the blues, or indeed any vaguely paisley inclinations later torchbearers have contributed to that tradition.

There are lots of colours here, but none of them you’d associate with happiness. There’s an almost malevolent pursuit of satisfaction, but the way Tim Evans sings it’s like he’s always very far away from reaching it. He sounds like he’s keeling over, clutching a signpost, gasping for air. His voice doesn’t sound like it’s communicating at all, but instead making sure that it’s at least still there. The way Sweaty Hands is mixed, it kinda just glides over you like some sickly red gel: it’s a mass of phlegm-like texture, warm like a womb but impure, and frankly, not good for your health.

Sweaty Hands is a convincingly modern blues record: its neurosis isn’t borne of heartbreak or even poverty, but instead an overwhelming dread at the spectre of the Earth: everything is a silhouette, and its emergence from the shadows is a thing of horror. Imagine being so drunk on cheap spirits that all you can do is lazily struggle in the corner while it approaches you – that thing, mass or phenomenon. That’s what Degreaser sounds like: doomed. There’s not a shred of idealism or hope. An appropriate direction for the blues, then.

Following Degreaser’s debut 2011 LP, which was enchantingly titled Bottom Feeder, comes a new release on Negative Guest List called Sweaty Hands. Degreaser is a New York-based group featuring Tim Evans of Bird Blobs and Sea Scouts fame, so there’s a handful of people who will have already made up their minds about this, ie, that it’ll be awesome. I’m not so sure, as I’ve never followed the guy’s music closely (never heard a Sea Scouts record *flinches*) but this sounds debased and sordid enough to hold my attention for at least four minutes, which is… good.

This track reminds me of a time when I lived in a Bathurst sharehouse. One of the townsfolk came around and set up a bucket bong in the centre of the room. He took a massive hit and then had an epileptic fit, taking down one of my housemates’ ornamental mannikins (dressed in a dog collar but otherwise nude) in the process. After his fit he kinda just sat there with his legs crossed for a bit, and then had another bong. Get stoned at any cost, this music tells me subliminally. Full review shortly.