Following what is apparently the permanent winding down of his Stitched Vision vehicle, Newcastle’s Jason Campbell has released his first track under the name Collector. While the instrumentation hasn’t changed much, Campbell’s new approach is a lot more arresting than the sad, retro-futuristic fug found on those old Stitched Vision tapes. It’s almost like he’s working in reverse: Collector feels like the storm that tore through the world that Stitched Vision posthumously explored.

A Collector release is finished, but I’m not sure when we’ll get to listen to it. Soon I’d wager. 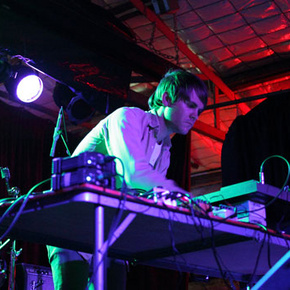 Stitched Vision released a couple of very pretty, retro-futurist ambient synth cassettes a while back, but as far as proper releases are concerned we haven’t heard anything new since last year’s Fold. I haven’t actually heard that tape, but Jason Campbell’s 2010 debut Open Palms is a pretty essential (albeit sold out!) release, and the other project he’s involved in, Tailings, is also worth a listen. Very unlike most of the other stuff you’re probably used to hearing from Newcastle.

Stitched Vision has a new album coming out “later this year” on Campbell’s own Eternal Solitude label, and the track embedded below will feature on it. Entitled Holding It Together, Campbell tells me he’s still not sure whether it’ll be a tape or an LP (or, ha, CD!) but whatever happens, it sounds like he’s plumbing the same glistening nostalgic depths he always has. Perfect for tower block fetishists.