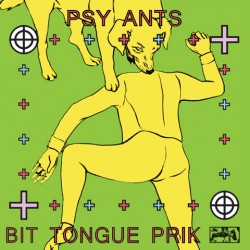 Psy Ants released this LP a couple of weeks ago and then disbanded, so this is the only record they’ll ever have, and you’ll probably never see them play live again. Consisting members of Per Purpose, Knee Chin and Cured Pink, the Brisbane trio formed around the duo of Aiden Hilcher and Mitchel Perkins, and eventually recruited Glen Schenau on guitar. They played the type of noise rock that sounds life-changing after about four (maybe five) longnecks.

The record plays out like a 20-minute rush of ugly texture: flaked with rust and bluntly serrated at the edges. Mitchel Perkins yells/sings like he was dropped as an infant, and the ensemble itself is unusually technical for a group like this, changing tempo and tack several times within the space of a two minute tune. ‘Belts & Ties’ is an exception: a short and leery chant that approaches something almost frightening in its nastiness. Elsewhere, foreign elements like chimes (?) make ‘Toska’ a little bit weirder than your run-of-the-mill “angular” noise rock tune.

Overall, it’s true reprobate filth. If someone played this record to you without saying what it is, you’d probably guess it was made in Brisbane. Bit Tongue Prik consists eight songs, and each is a mess of feedback and yelling. You could slot these guys on a bill with Slug Guts, early Per Purpose and nowadays Sewers, and you’d have a very… thematically consistent show indeed. That’s where I imagine this group would shine – playing to a room of fellow imbeciles. This is a serviceable enough record, very good for what it is, but all three members are doing more remarkable stuff now.

Story goes that Psy Ants were a Brisbane group formed out of the ashes of a band called Science. They evolved from a two-piece consisting Mitchel Perkins and Aidan Hilcher, before expanding into a three-piece, with Glen Schenau of Per Purpose and Marl Karx on electric guitar. As with that other group Glen Schenau played in, Psy Ants are releasing a debut LP and then calling it a day. Seems like a pretty dignified way to die in the rock ‘n’ roll business. All is not lost though, because the members now play in groups like Per Purpose, Knee Chin and Cured Pink. Good on them.

Their debut LP is called Bit Tongue Prik and it’s out through Vacant Valley right now. Take a listen to the track below. We’ll review it soon.

They’re in the middle of their final tour at the moment. Most of Australia will have either missed them or seen them by now, but if you live in Adelaide or Brisbane, here are the details: