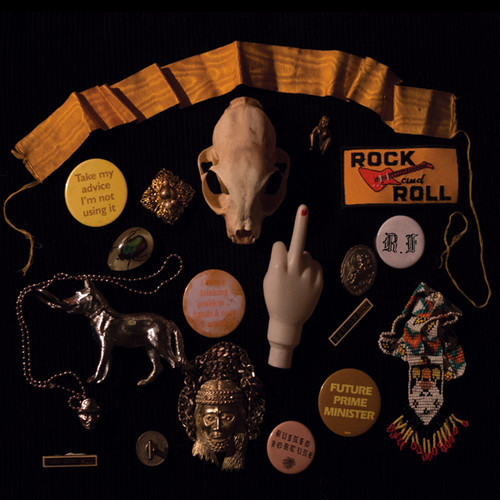 It’s easy to trace the origins of Ruined Fortune within Sydney’s music community. Angela Bermuda (Circle Pit, Angie) and Nic Warnock are a recording two-piece (the live band also includes Sam Chiplin and Jon Duncan) who both discovered the city’s underground more or less at the same age, and within half a decade defined a small percentage of the city’s musical aesthetic. It was inevitable that they would eventually collaborate, and the timing of their first LP comes at an interesting personal intersection between the two.

Warnock has been progressively moving into weirder territory (see his Exotic Dog project and the evolution of the RIP Society release schedule) while Bermuda – with her recent solo release Turning – has been working hesitantly away from Circle Pit’s dirgery towards a classic rock realm. The Ruined Fortune LP loosely borders the midpoint of these two directions – either in leaving or arriving at what could be seen as each other’s territory – and the record retains the feeling of pushing at those fences.

The approach of Bermuda and Warnock here is like a butcher’s paper brainstorm that no one wanted to refine. It’s a mess of conflicting ideas: grunts that fight moans for space, melodies that blow like tumbleweed past oversized riffs and subject matter that, but for the landmark ‘Closing Till’, is hard to pin down among the noise. It’s not sprawling so much as strewn across the fields, but there’s a definite form that’s created by its physicality.

This sprawling effect is likely a result of both the erratic Ruined Fortune aesthetic and the involvement of Cured Pink’s Andrew McLellan in the studio (someone with an innate ability to introduce turbidity to whatever he touches), with the trio mixing muddy distractions through guttural rock songs. They could’ve played this straight (in fact, Angie did with Turning), but there’s too much going on here to be that easily controlled. This kind of record can only come out of collaboration; maybe even a slightly uncomfortable one.

The vocal delivery is forever strained, words that push at restraints before being plunged into thickets of distortion. Bermuda and Warnock fight each other for space on ‘In A Hole,’ Bermuda grits her teeth on ‘Black and Red’ and a couple of minutes pass on ‘All Seeing Eye’ before anyone clears their head to approach the microphone: it’s damaged. Hearing Warnock drawl “the fear of failure takes a hold of me” on ‘On the Screen’ is like tapping the wire of a tensioned fence: even at rest it carries a load that stretches a mile.

Ruined Fortune’s persistent self-description as a “freedom rock” act might be a joke about the hog-on-the-road quality of the band’s guitar-driven core (Warnock even used to wear a red bandana at Ruined Fortune shows to fit this character), but there’s probably some other truths to that. This record has a certain chaos, maybe because both songwriters have been removed from their comfort zone. They’ve been separated from their close confidants and made to table ideas without any backup for a veto. The record sounds full of conflict and tension, but it thunders ahead anyway. Ruined Fortune carries an engine so powerful that the whole machine falls apart as it runs.