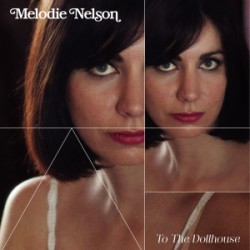 I was tempted to write To The Dollhouse off as nothing more than a mundane reproduction of analogue nostalgia circa Holly Golightly and Fabienne Del Sol. One of them references a fictional female icon of the ’60s. The other imitates music from a period and a country she wasn’t born into. Both are a bit boring. But then Melodie Nelson (aka Lia Tsamoglou) is different. Her heroine is the underage girl-child that Serge Gainsbourg leches over in his acclaimed concept-album Histoire de Melody Nelson; her influences ranging from famous fiddler Roman Polanski to feminist symbol Virginia Woolf.

Tsamoglou’s eclectic, technicolour 2011 album, Meditations on the Sun, represented ideas you could probably put down to an end-of-the-decade throwback to a simpler time. Yet, recorded in a matter of months after her debut and released not even a year later, To The Dollhouse is its darker, more complicated cousin. There’s the masochistic housewife swooning over the psychotic organ twirl of ‘Martha’ (“he strangled me inside the bedroom”) and the deceptively cheery implications of a conversely drunken ballad to dead-eyed seduction in album opener ‘Cherry Cherry’.

That’s because ‘seedy’ and ‘suburbia’ didn’t always come hand-in-hand; at least, not explicitly. So Tsamoglou has taken it upon herself to draw out the shade beneath the illusion of domestic harmony. It’s as if she’s focussing in and expanding on the darkness of, say, Peggy Lee’s bleak existential crisis in ‘Is that All There is?’ or the perverse implications of Marilyn Monroe’s sexualised rendition of Julie London’s ‘My Heart Belongs To Daddy’. There’s certainly a thematic thread following a corrupted ideal of femininity, focussed on stolen youth and spoiled beauty in To The Dollhouse. The murderous title-track and album closer (an unmistakable reference to Woolf novel To The Lighthouse and parallel to the broken innocence of ‘Cherry Cherry’) is rife with twisted innuendo as Tsamoglou croons, “he reaches down with heavy arms to take her,” over a pause in languorous guitar rhythm.

‘666’ is the evil side of a Hazelwood and Sinatra duet as a brooding bass line carries a Tsamoglou and Geoffrey O’Connor’s doomed romance through the motions, while it doesn’t take a genius to read the innuendo of ‘Take Me For A Ride’ –bumping tempo or not. Because depending on where you’re standing, To The Dollhouse could either be a twisted, distorted portrait of the past from the perspective of the present, or the clearest representation of the attitudes and ideas that stuck from a time best forgotten.