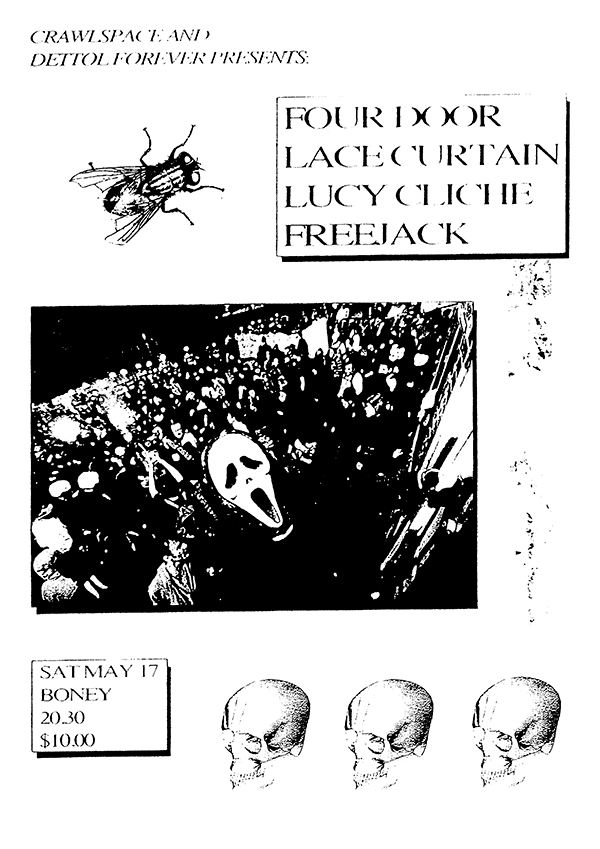 To celebrate the night, we are giving away a double pass. This means you will not need to pay to get in. Instead, your name will be on a special list and you will be allowed to enter the bandroom without exchanging money. You will need to save your money now that Joe Hockey has ruined the country.

To enter, just email us at crawlspacemag@gmail.com and write one sentence about whatever you like. The sentence can contain as many words as you wish. If you write two sentences and you’re the winner, I will also send you a copy of the Dead or Alive 5 soundtrack, which is music from the video game of the same name. If you choose to opt out of the CD giveaway, we will understand.

You will need to enter before 5pm on Friday afternoon in order to be eligible. Check out the Facebook event page here.

Crawlspace is happy to announce its second show in Melbourne this May, in conjunction with Dettol Forever. Featuring Four Door, the first Lace Curtain show in an age, Lucy Cliche and Freejack, it will take place May 17 at Boney in Melbourne. It follows our well-attended show in August last year, which featured Wonderfuls, Love Chants, Flat Fix and Woollen Kits.

If you don’t know any of these artists then it’s clear you have never read this website before, in which case the following relevant links will provide useful information. Lace Curtain is the duo of Dave West and Mikey Young. Live, according to material we were sent, Lace Curtain is “David physically and emotionally torturing a microphone and a sampler.” They are set to release a new 12 inch very soon, but in the meantime you can read this interview we conducted upon the release of their second record last year.

Four Dour is the duo of Matthew Hopkins (Half High, Naked on the Vague, solo) and Jonathan Hochman (Holy Balm). They released their first 12 inch last year through Nihilistic Orbs. We were rapturous (if slightly ambiguous and prolix) in our praise.

Lucy Cliche is one half of Half High, Knitted Abyss and Naked on the Vague. She released an excellent cassette album entitled Picture Yourself late last year which is perfect for late night drives to Mount Canobolas with billy in tow.

Finally Freejack is Liam Osborne, formerly of Flesh World, and the designer of the poster at the top of the page. We spoke to him a couple of months ago about his excellent Untitled Documents cassettes, chiefly because we were too engrossed in the music to formulate a cogent review.

We hope to see you there, because it is going to be a very good show. Say you’re going on Facebook, if you like.