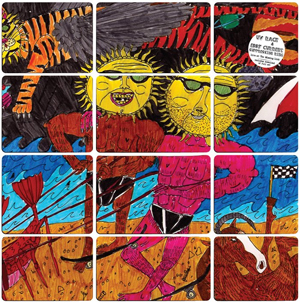 UV Race played Sydney recently as part of the Repressed Records tenth anniversary celebrations. It was the first time I’d seen them play since the Sydney Flip Out festival in 2009, and it served to reinforce how weird this band is. Not for the obvious reasons though: Marcus’s onstage persona tends to be front and center in any discussion of UV Race, but the songs themselves, or the way the lyrical content is delivered and accompanied, is what makes UV Race great. Marcus’s lyrics often tackle (or kinda lazily address) “big” social issues or conditions in what seems like an intentionally naive fashion. Here, “media causes paranoia” is hollered over guitars that sound kinda mocking and ambivalent. Constantly dished out liberal sentiments are delivered with a double-edged sneer. Recognition of a corrupt media is here delivered with almost exaggerated horror, and maybe it’s drawing a long bow but when UV Race dish out tried and true punk platitudes they sound like they’re as tired of the dialogue as they are the specific demon being tackled. Look at this hilariously futile battle of principles being played out!

This live recording of ‘Bad News’ isn’t new: it’s a live recording from a Missing Link in-store performance committed to cassette on a split with Eddy Current Suppression Ring in 2009. But that split is getting a vinyl reissue on Almost Ready Records soon, so it’s worth bringing to your attention again. You can preorder the split here.

Here’s a video of the band performing the song on a different occasion: