After a period of quiet, Melbourne duo Legendary Hearts has a new cassette releasing August 19 through Not Not Fun. The sound will be familiar to anyone who enjoyed the 2012 release Music From The Elevator, which we unhelpfully described as “patently pleasant music losing its will to pleasure”. More telling is that this is the combined effort of Angel Eyes‘ Andrew Cowie and Superstar‘s Kieran Hegarty. Describing Legendary Hearts as an instrumental mix of these groups is pretty accurate, though ‘Accelerate’ seems to indulge in the dubbier end of the spectrum.

I don’t understand why people find noise music ‘difficult’ or ‘pretentious’ or ‘not musical enough’. Take this LA County Morgue cassette for instance, recently issued through Altered States Tapes. Few lives are lacking space for music like this because it’s virtually nothing. That is what’s appealing about it. It’s an adornment to silence. It’s an accessory for absence.

LA County Morgue is tainted silence. Unlike song, unlike composition, it’s not a sequence of moments. It’s a space. It is something you do not listen to, so much as visit. Above all else this LA County Morgue cassette reminds me of a flavour, or a paint colour, in the way it lends a certain charcoal shade to an otherwise white room. It’s unremarkable. It’s just a louder form of nothing.

No doubt many listeners and writers obsess over and question the relevance of noise music in 2014. I suppose noise music can no longer be a statement. I suppose it is no longer radical. It is ambience above all else. Actually, that is exactly what it is: it’s an ambience. It’s an impression and a point from which to begin. You do not gain answers or insight from a noise recording like this LA County Morgue cassette. None that are prescribed, anyway.

Pop music has to resonate widely in order to be deemed worthy, and rock music is currently in the midst of its umpteenth return from the grave. Why do we believe in these narratives? My belief is that noise music, ironically, is a type of music we can resort to when we do not desire meaning, or when we have tired of canned, readymade meanings.

What can this LA County Morgue cassette actually mean? What themes does it contain? How does it represent us? It doesn’t, and that’s a relief. How can any cultural artifact contain a truth? Noise music, once pregnant with theory and meaning, is now exactly what it could never have been when it emerged: totally lacking meaning. It took this long for its name to arrive at its purest meaning. This lack of meaning is the ultimate reflection of our reality.

There’s nothing particularly special about this LA County Morgue recording. It’s valuable because it lends a certain charcoal shade to an otherwise white room. I enjoy it for this reason, and that’s why you might choose this cassette over any other noise cassette.

I suppose it’s better to speak of noise music now, in the same way we do paint colours. But instead of the names of colours, we might use words for emotions, or impressions. Apply this LA County Morgue cassette when everything else leaves you feeling empty, or condescended to.

LA County Morgue’s It Was Become Over is available through Altered States Tapes. 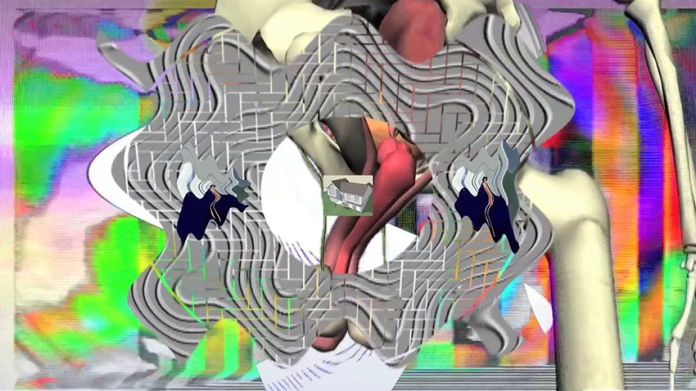 There is no room on this Soft Power record; it is thick and overripe. It feels like these songs have sat in a moist basement for a long time, and through doing so grown larger, furier and more complicated.

Andrew McLellan, Joel Stern and Josh Watson are all involved in this. All featured in Greg Boring, and there is a fair bit in common between the two entities. Soft Power is softer and less wacky, but it’s also stranger than Greg Boring. This is no small feat because Greg Boring seemed to pride itself on being strange. Instead, it was wacky. I’m sure you appreciate the difference.

Soft Power has the clarity of pop music thanks to the vocals of Sophia Brous, who is the fourth member of the group on this record (Soft Power is usually just McLellan and Stern). I suppose that is why the group is called Soft Power: its pop veneer appears eager to please at first but there are less scrutable motives at play. A macabre streak underpins these bright synths and illustrous vocals, undermining the pop elements in an unusual way. ‘Siren’, for example, seems to break apart at times. The effect is like textures in a virtual landscape wavering, and the song resembles a beautiful error state. Brous sounds like she might belong to another song altogether.

That is what’s interesting about Soft Power. The music seems poised to illustrate a particular kind of 21st century technology anxiety, but it does so in a more subtle way than most. It seems to relish the minutiae of strange systems by humanising sonics we’re used to hearing in more sequenced, rigid environments. It is strange to hear a song like ‘Wundering’, with its drowsy synthetic pulses, and notice the imperfections: how the tempo shifts upwards or down accidentally at times, or how a note will fall out of step with the rest. These lapses breathe life into cold systems.

Soft Power’s songs sound like they have been tampered with. They sound as if they are functioning despite data corruption. Maybe instead of locked in a basement, these songs have sat on an old PC for years, across the fragmented blocks of a hard drive touched by an old virus, absorbing the surrounding data. During a year which has seen several overtly dark synth pop records (Nun, Mob), Soft Power is frightening in a more fascinating and inadvertent way, but it is also very beautiful.

Soft Power’s If You Come Around is available through All Day Breakfast Enterprises.

There are few facts on the ground re: who Thhomas is, though I gather he’s from somewhere in North Melbourne and he also plays in a group called 30/70. His debut solo cassette is now available from Canberra-bassed cassette label Moontown Tapes label, which has also issued recordings by Enderie Nuatal (of Cured Pink fame) and Sewer Side.

This self-titled cassette is quite diverse, ranging occasionally bluesy instrumental hip-hop laden with samples, through to ‘Heat Wave’, which for mine is the highlight. It starts off in early Aphex Twin ambient territory before picking up pace, gaining a swing, and blossoming with some sad Satie-esque piano and synth melodies. The full tape can be streamed and purchased here.

Brisbane duo Workshop only played their first show a couple of months back, but they’ve already released a cassingle entitled Repeat After Me. The catch (and there always is one) is that the cassingle is (or was) limited to a measly 15 copies. Never mind though, because it appears that a full-length cassette will release through Tenth Court in late August.

I first heard Workshop on Matt Kennedy’s 4ZZZ radio show. It’s a simple song with a simple hook, but the vocal harmonies have an ineffable, inhuman quality. Despite its icy mood the melodramatic synth lines push it into ‘90s euro goth territory at times, which is not an especially bad place to be.