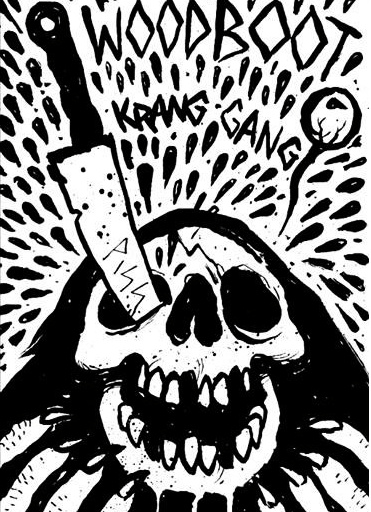 Starting and stagnating as a two-piece, this jangly Brisbane duo of Daniel and Julien decided to thicken their sound last year, and so formed a fully-fledged band. The addition of second guitarist Sam and drummer Donnie prompted an album, and Krang Gang is the first release for these garage grime ‘n’ rollers. The group follows in the footsteps of The Spits and the Ramones with fast-paced, three-chord gusto.

Krang Gang is nine songs for the attention deficit, charging by at under two minutes each and with a vibe which emulates that of a Warriors-type street gang. “Krang” is a super-villain from Teenage Mutant Ninja Turtles, so that must position Woodboot as the bad guys. Listening to this tape, visually that’s what you see: a gang of wannabe tough greaser fellas with their white tee sleeves rolled up threateningly. Get to know them though, and they’re a lot of fun. Mean thugs but harmless. The vocals come through clear in the tape but live they spit and dribble them out, sing-song along to fuzzy and strung-out but up-beat guitars.

Their lyrics are like a rumble: delivered simply and as they see it, dumbed down and with little depth. ‘Head Crack’ runs along similar lines of blunt-force violence, while ‘Avoid Me’ moves into the comically sci-fi with paranoid guitar bridges emphasizing the craziness of gamma rays causing your skin melt off. The rest of their songs run along those two themes of action scenes and weird ’50s style radioactive mutations. ‘I Hate Summer’ is stand out: a tune to dance to as long as you don’t pay attention to the lyrics, which complain that it’s too hot to do anything, contrary to what the music makes you want to do. Lyrics contrary to song titles like ‘Genius’. Ultimately the songs are descriptive more in the mood created with the music that builds scene and story, the lyrics providing only the basic plot line.

Woodboot aren’t trying to do anything different. It’s nothing you haven’t heard before but it’s done with such angsty energy and enthusiasm that it doesn’t matter. This tape contains feel good tunes that are easy to listen to and don’t take much dissecting for ultimate partying.

This album has been pressed twice and sold out both times. Initially available through Long Gone Records, the repress by Nailgun Murder Records has updated artwork and lyrics included, both done by Sam McKenzie. He has also done art for similar bands such as Nobunny, touring soon, and other Brisbane locals like Sick People.

Krang Gang is available on the Woodboot bandcamp page.