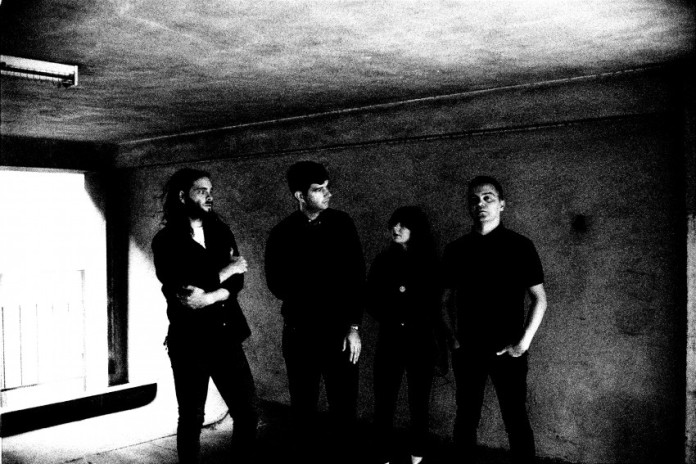 When NUN plays live, a seemingly endless array of cables spew forth from tables of analog equipment, watched over blankly by Steven Harris, Tom Hardisty and Hugh Young. In front of it all extends a lead to the microphone of Jenny Branaghan, who contorts herself under thickets of smoke and a projected dome of white noise. In the right light, it can look like Branagan is being controlled by the wires of a demented puppeteer. At other times she looks like she’s thrashing against cabled restraints. Her warbling vocals accompany music which recalls some distant childhood memory of a perverted horror movie, and that’s probably where the mental images come from. Nun’s record is similarly inclined: it’s deliberately otherworldly.

Branagan’s vocals are chilling throughout the record, starting with the cringing shouts of “let me piss on your rich mother’s lips” on the painfully slow opener ‘Immersion II’. The album art consists of grainy nondescript images shot in monochrome, while the song titles referencing David Cronenberg and Uri Geller recall mysterious moments of the past rather than anything in the present. It also looks abjectly to the future: “Going to the cinema in the future is really grim” is emblazoned on the inner-sleeve and spat alongside references to replicants on ‘Kino’. It’s a record that’s inspired by imagery and phenomenon that is simple enough to identify – from ‘70s/‘80s cinema to the early synth-punks – but it’s thrilling nonetheless.

NUN is a band that has come from mixed sensibilities. The fact that their synth-punk/electro aesthetic comes from musicians also involved with Woollen Kits and Constant Mongrel may be surprising to some, but there’s a different set of rules for NUN. For some of the reasons listed above NUN excites me like few other recent bands have, but for the same reasons they’ve been swiftly dismissed by others.

In an unusually fiery comments thread on Crawlspace, the phrase “stylized nostalgia” was recently used to describe NUN. While the commenter intended it as criticism, I actually think it’s an appropriate description. I don’t think that referencing the past in an intentionally stylistic manner immediately makes music unimportant, forgettable, or as another commenter put it: “as relevant as Jet.” 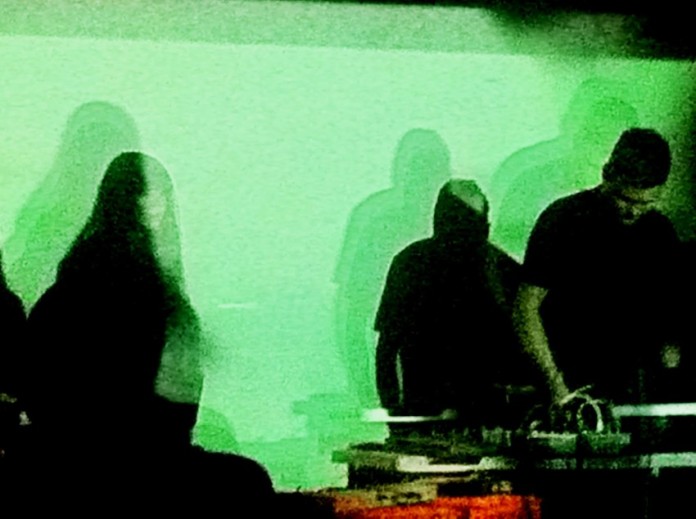 In the case of NUN, half of the appeal for me is the idea that a band can tap into some kind of distant memory and add a modern relevance to it. This is probably a generational symptom (I wasn’t old enough to experience the ‘80s, for example) or a result of personal philosophy, but I think many would agree that there’s a freshly defined context to current Australian underground music that transcends the influences it may contain, especially for those who have only participated in it recently.

For longer than I’m capable of remembering pop culture has been referential, so the idea of a band being just another loop in a chain of recycled ideas is irrelevant to me. I’m not inclined to dwell on any perceived similarities between, for example, NUN and Suicide, because I really don’t find that interesting. I feel like the comparison between a four-piece from Melbourne and a duo from New York is increasingly misinformed when there is a much more accurate local context at play.

What I do find interesting in modern Australian music is that it has come to exist in its own bubble in both space and time, to the extent that it lives within a context that is self-defined. Perhaps unusually, I tend not to address bands in terms of their place in a 50 year musical history or as compared to bands overseas. Instead, when I listen to NUN I see them as contextual siblings to bands like Chrome Dome, M.O.B or Multiple Man. I actually feel that ignoring NUN for reusing ideas from the ‘80s comes from a lack of appreciation for context rather than an acknowledgement of a greater one.

When it comes to bands I like that dabble in nostalgic sounds, much of the appeal comes from the fact that you can subconsciously feel and identify the source of their influences. These bands and the relatively recent rise in their popularity among a new generation (see Angel Eyes, Primitive Motion, Flat Fix or Lace Curtain, all of whom are reminiscent of ‘something’) comes from a form of extra-sensory nostalgia. For me, most of the exposure to the sounds applied by NUN comes not from an encyclopaedic knowledge of the history of electronic music, but of sub-conscious infiltration via the influences that flowed on from that. These can include film soundtracks, lingering aspects of past Top 40 hits and the primitive sounds of 8/16/32-Bit video game soundtracks. For a band participating in ‘stylised nostalgia’, it’s almost like they’re mining memories I didn’t know I had.

NUN’s Jenny Branaghan has talked previously about how her desire to re-watch Videodrome led her to write the song ‘Cronenberg’, and more generally, the routine absorption of horror films as a child via her older brothers. The cultural experience of a child or teenager is different to the more conscious one experienced as an adult. As an adult, experiencing culture is more deliberate: you choose to watch a film based on reviews or discussing it with friends, and you more or less know who Hans Zimmer is. As a kid, you watch a slasher flick just because someone put it on after school, or you play Castlevania on your neighbour’s Sega with the soundtrack playing incidentally for hours at a time. In that sense, hearing aspects of those distant, sub-conscious influences now elicits a different response compared with the music you’ve actively sought out as an adult. Acts like NUN elicit the same feelings within me that I used to feel as a kid: an unknown rush that comes from not fully understanding what is going on in Scanners, but watching intently anyway.

There’s probably a broader reason bands of a nostalgic ilk are rising in prominence, and while it’s not limited to bands of an electronic bent, I think it’s especially prominent in that realm. In my social circles there seems to be a general desire to return to simplicity in many regards, perhaps due to the realities of a modern life that we didn’t grow up expecting. So dramatically has exponential technological progression occurred, that it’s almost like there’s a push to reclaim what dropped out of vogue in the process. See the way ‘retro’ has affected fashion (the rise of the ironic ‘90s t-shirt for example), the fetishised acceptance of tape decks and turntables, or here, the re-emergence of the analog synth.

Meanwhile in mainstream culture, films are stuck in a race to be increasingly larger in scope, and AAA video games consist of artfully crafted video sequences that eventually fold away into actual gameplay. Personally, the return to what felt like the more honest or relatable mainstream culture of my youth is inspiring and exciting. I will never again be mystified by Blade Runner like I was as a 13-year-old, but NUN’s LP makes me feel approximately similar to how that movie did the first time around.

NUN’s LP may have been created with evocations of the past in mind, but I don’t think that makes it any less sincere or honest than someone who is trying to forge new frontiers through experimentation. I think the amount of sincerity involved in forcibly trying to ignore aspects that artists of the past have addressed would be equal to those who happily go with whatever sound comes to mind, or those who set the boundaries of recalling a certain era. I also don’t think those three philosophies need be at war with each other.

My interest in synth-based electronic music has mostly been piqued by Australian artists of the last five years, any of whom may fall into any of those three philosophies of intent: Lace Curtain, Primitive Motion, Angel Eyes, Flat Fix, Lucy Cliche and Superstar are examples. NUN are unlike most of those bands, but they all seem to fit into something common, via an aesthetic that’s hard for me to place other than that they all dabble to some extent – intentionally or otherwise – in a nostalgia that I can only experience hazily. They may not all be setting out to mine sounds of their youth, but it interests me because they’re often mining mine.