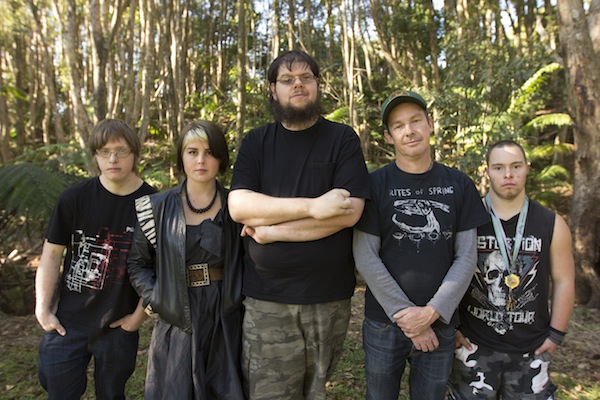 Tralala Blip’s newly released LP Aussie Dream is a joyful and strange record. The electronic instrumentation has a bright beauty which somehow avoids veering too far into twee territory, and the half-shouted vocals indicate a freedom of expression quite rare in an age where everything kinda sounds like something else.

The five-piece from Lismore, consisting of several differently-abled musicians, has undergone several line-up changes since its formation in 2007, but Randolf Reimann has always been at its centre. A former member of Sydney hardcore group Massappeal, Reimann has grown the group from fairly humble beginnings into a unit which has now toured Europe as part of the Unsound Festival.

In the interview below, Reimann outlines the origins of Tralala Blip and how the group fits into the country’s experimental music scene(s). Aussie Dream is now available through Disembraining Machine.

The new record is excellent but it’s the first I’ve heard of Tralala Blip. Can you tell me about how the band formed and what you’ve done so far?

Tralala Blip formed at the end of 2007. It started with me giving electronic music workshops for people with intellectual and physical disabilities. At that time I became aware of how bad existing music programs were for people with disabilities living in regional areas around Australia. At the time, music programs usually meant a singalong situation with a facilitator strumming their guitar while others sung along or banged a tambourine.  When I witnessed this, I just got angry. It seemed lazy, patronising and was obviously boring for the people who were participating. I had a lot of gadgets at home from years of making electronic music and i knew a little about singing from my years as vocalist for Sydney thrash/punk band Massappeal. So I started taking the bits along to a disability service in Lismore and encouraged people to start composing their own original songs.

By around July 2008 the 12-15 members of this loose collective had written about nine original compositions. We decided to do what a lot of bands did around that time and start a MySpace profile. We also compiled the songs and released a CD-r titled Tralala Blip presents Soundbeam Sessions Vol 1.

By the the end of 2008, the disability service that we got together at every week informed me that none of the 16 participants were interested in continuing the project.  Something did not seem right to me because i knew that some of those 16 or so people were developing very quickly and were very passionate about Tralala Blip.

Over the next couple of weeks I was approached by at least five people from the ensemble asking me why they were no longer coming to the hall to make songs. My response was “well according to the day service, you chose not to continue.” The look on these artists faces was total bewilderment. Something was obviously flawed in this services procedure regarding people making informed decisions about their choices. I was pissed off to say the least!

In 2009 we began operating independently of the disability service. We stopped operating as a program and naturally began functioning as a band.  At that time, Accessible Arts in Sydney encouraged me to deliver some workshops so along with Jacqui O’Reilly of Accessible Arts we delivered workshops at ElectroFringe Festival Newcastle, Sydney Powerhouse Museum and Carriageworks Theatre Sydney.  We became good friends with local sound art collective Sound Crucible and began doing regular gigs too. Our first gig in Brisbane was with Sound Crucible head honcho MuttBoy and was at a Disembraining Machine night at Alchemix Studio. After that gig, as we were loading gear back into the van, Joel Stern of Disembraining Machine asked us if we would like to record an album for their label.  It took a couple of years but our new LP Aussie Dream came about from that initial conversation.

In 2011 we recorded a beautiful collaboration with Muttboy called Tralala Blip Meets Muttboy In Atlantis. That 12 inch on Blue vinyl is available through Sound Crucible.

We toured Melbourne and Bendigo for that record in 2012, playing with our friends Mad Nanna.

Through our association with Sound Crucible we came in contact with Lawrence English of Room40 records. Lawrence has been very supportive of us and has given us quite a few gigs in Brisbane over the last few years.  We also recently released a cassette on his A Guide To Saints imprint. that cassette is called Submarine Love Songs.

Lawrence also work with us on a theatre work titled My Radio Heart. This work featured music by Tralala Blip as well as us performing as main characters in the show. My Radio Heart just finished it’s Sydney season last week.

Oh, and in 2013 Tralala Blip were invited to perform at Unsound Festival, Krakow, Poland. Which of course was absolutely amazing!

Has the group shared the same line-up since its formation?

Mathew Daymond and myself have been in Tralala Blip since the beginning. Lydian Dunbar joined in 2010, Zac Mifsud joined in 2011 and Phoebe Rose did her first gigs with Tralala Blip at Unsound last year and My Radio Heart recently. Phoebe also runs an artspace/venue in Lismore called The Wasp Factory.

Tralala Blip is described as having a differently-abled line-up. Does this affect the sound in any measurable way, that you can describe?

Within the first week of our initial jams back in 2008, I thought we sounded like a cross between early Animal Collective and Bruce Haack on heavy sedatives. Also, I was so blown away with the lack of ego and the lack of self consciousness, and because of these omissions from the music making equation, the resulting self-expression was truly original. It was just people being people. It was not dissimilar from early punk/post-punk gigs i witnessed in Sydney during the ‘80s. It had the same raw self expression.

In the beginning we used to all use my personal collection of instruments but now, everyone in Tralala Blip has their own instruments. Everyone in the band gets paid professionally as artists. My Radio Heart for example, was in creative development for over two years, and the theatre companies involved, NORPA and Urban Theatre Projects, treated us the same as they treat any performer/artist. So early on in this creative development, we all used some of our wages to get new instruments.

Our abilities and disabilities when it comes to using these instruments is a little complex. An instrument like the Tenori-On that Zac uses wasn’t designed as a conventional instrument anyway, and people are crazy for modular stuff these days and in part, I would say that is because they inspire different approaches to composition. Mat has an MS20 and the patch bay begs for random experimentation. Mat’s approach to using this machine is not dissimilar to many who have this same machine. Phoebe does not have a disability and she makes more random noise than all the rest of us.

Aussie Dream seems like a provocative title for a record, especially during the current political situation. What did the band have in mind when naming it?

The cover illustration is by Mat and it was titled Aussie Dream. Joel Stern loved the illustration and suggested leaving Aussie Dream as the album title. Mat did that illustration a few years ago and it had more personal meanings for his originally.  Not far from Lismore there is an ongoing coal seam gas protest, and Mat is very much aware of what is happening in the town where he lives. Like most of us Mat has political and environmental concerns and is vocal about them.

He recently said this about the illustration: “Aussie Dream is full of songs about Australian dreams and nightmares. Politically, there are many Aussie nightmares right now. But this record is titled Aussie Dream and we must dream up positive futures. I did this cover illustration a long time ago. Disembraining Machine really liked it and I think it suits our songs that are inside this cover.”

What else inspires the sound of Tralala Blip?

Humour. Kooky experimentation. We all like different stuff. Recently Lydian’s choice for warm up dance tune before My Radio Heart was Hot Chip’s ‘Keep Falling’. Lydian’s favourite chill out music is currently Primitive Motion’s Worlds Floating By. We all absolutely loved Nate Young’s set at Unsound and we used Factory Floor’s ‘Lying’ in My Radio Heart.

Aussie Dream is a pop record, yet the group seems to have found a home among more stern, experimental artists when they play live. Is this where the band belongs?

This question may better be answered by the stern, experimental artists. But as much as we all love pop music, experimentation and improvisation have always been a prominent component to our operation. We have long found kindred spirits in the more experimental scenes, especially in Brisbane. People into more conventional pop music are unaware of our existence, and usually have a very narrow view of what pop music is and are very exclusive.  we love our friends who dwell in the more sonically inclusive realms of music.

Finally, anything coming up in the future? More shows, releases?
Now that the season of My Radio Heart has concluded, we’re looking at gigs in Melbourne, Sydney and Brisbane. We are doing a remix for UK artist Forest Swords who saw us at Unsound and loved us. and we’re writing new tunes for a 12 inch.