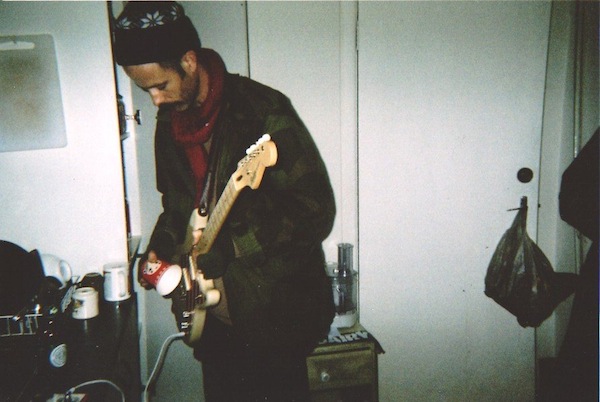 Lynton Denovan is probably best known, for the moment at least, as the driving force behind the widely adored Satanic Rockers. The group released its first LP last year and then disintegrated, but Denovan has several other vehicles for his songwriting. These include Encounter Group, a three-piece including Tim Wood and Jeremy Courbrough, and Sacred Product.

Sacred Product is Denovan’s solo vehicle, which has released material on labels including Alberts Basement, Heinous Anus and most recently Quemada Records. The latter comes in the form of a double 7 inch entitled Wastex, which quickly sold out at its source.

In the below interview, conducted by email, Denovan talks the factors that separate these musical projects, how Australia’s underground music scene is currently healthier than his native New Zealand’s, and the unlikely influence of a 16th century Russian tsar.

How would you describe your music or aesthetic sensibility if asked by someone you don’t know? And would that answer change if you were asked by a family member?

Hmmmm, my musical aesthetic is quite simplistic as I am self-taught on the guitar and don’t have the interest in making complicated sound overtures. Everything hangs off the colour of the sounds, mood wise, and the meaning contained within the words. Word Rock! Sounds religious! If I was describing my music to a family member or friend I would jokingly say it is blues/metal/noise song rock.

Haha, fair enough. It’s interesting when you say ‘moods’, as it seems there is a very tight / designed aesthetic that you are kinda working towards through your artwork and guitar playing. There is a looseness to the band but there is also a tightness, if you know what I mean.

I think the mood or thematic thing is tight because I’m a one man band. I can veto an idea quite easily if it doesn’t work. I throw away ideas if they don’t fit, which is crucial in order to get something that I can live with. If I’m not happy with the end result then it’s a goner.

Editing and rearranging lyrics is the biggie, while riffs and rhythms come very easily as I know straight off if the sound has my kind of attitude.

I think good ideas can be strangled if they are over thought or too clever. Keeping it rough but with firm meaning is my method, and most of the work is in trying different arrangements of words until it works. I base all the recordings around tight drumming with a self taught loose guitar style – that’s my sound!

I know you’re obsessed with lyrics – reading them, and reading while listening to the records. Is this because it makes the experience of listening to music a bit more personal… a higher level of engagement? How do you write your own lyrics? I feel it’s either something one obsesses over, or kinda blurts out.

Hmmm: (for me) lyrics are blurted out then savagely edited. I’m a big fan of lyric sheets. The rock music I love most always has a strong lyrical element. I get quite bored with music that has nothing to say – there’s a lot of life out there in the world both good and bad that is worth experiencing or commenting on. Music is not only about hammering drums and plucking strings.

Who are your ultimate guitar playing heroes, either living or dead, local or international, and why?

For guitar heroes, I’d have to say Dave Mitchell from Ghost Club (who may still be performing occasionally in New Zealand). He knows how to screw the guitar up into a ball of paper and unfold it at surprising moments. He has an intensity to be reckoned with. Players who worship the fact that they have just paid off a fancy vintage Fender usually bore me with preciousness: gotta break it to make it.

I like a lot of cathartic metal playing too, especially early ‘90s Darkthrone. Panzerfaust hits it heavy how I like it! Fenriz, the mainman of the band, plays guitar on this one and he has an anti-performance and anti-muso stance that I respect. Maybe the politics can be easily disposed of though. Mick Turner on those Venom P. Stinger records is quite mindblowing too, for his precise swathes of chords.

What are your thoughts, being a New Zealander, about the musical legacy of the country? I’m especially curious about the weirder edge, the unknown bands, the furthest away. New Zealand bands seem to bridge a balance between rock and roll and the outer spectrum. I’m talking about bands such as The Dead C, SpaceDust etc.

New Zealand music, hmmm. There’s been a few highlights – Skeptics, late period Snapper, Sferic Experiment, Axelgrinders, Mindfuckers, And Band, Perfect Strangers, Axemen – I could make a long list! Although I am a big fan of digging up music history and celebrating it I wouldn’t want to rest too much on the ‘legacy’ aspect. There’s a breed of music coming out of New Zealand that seems to want to recreate a twee ideal of the past. I prefer to push on and look at what is happening in the world now.

Is Encounter Group your most recent project? How does the dynamic of a three piece appeal to you? Is it a continuation of or natural flow from Satanic Rockers, or a different project entirely?

Encounter Group is a break from Satanic Rockers. My interest in ‘Satrocking’ had finished and I wanted a different underlying rhythm. The swampy beat was quite fun for a while but I am more inclined towards snare and kick punchiness. Also, Satanic Rockers was a bit more collaborative whereas the Encounter Group material stems from my solo recordings (Sacred Product). I gotta make sure my ego doesn’t make this one boring.

I wanted to ask about the artwork for all of the projects. Is there an overriding theme, or is it more just an aesthetic choice? With the Sacred Product LP was the cover drawn for the record, or was it an image you saw and liked?

There’s definitely an aesthetic vibe to the kinds of images I am drawn to. Previously I have spent a lot of spare hours looking at battle worn faces from World War 2, especially the ‘bad guys’. In the last year I have become more interested in showbiz characters such as Oliver Reed (I drew his face on the Sacred Product double seven inch cover) and any larger than life type characters. They may be controversial, but they seem to put themselves fully on the social table unlike a lot of politicians whose faces seem grey and unrevealing. I find faces very intriguing.

The LP cover I painted especially for the album. I had an image in my head one day of a cow (which is sacred in some parts of the world) spilling milk all over the paddock. It is the first time I have done an animal face and it seems imbued with human characteristics. Animals, as far as I am aware, don’t waste resources but humans do. I’m not sure if this dichotomy is a totally tight packaging concept but it is very visually appealing and links in with some of the lyrical messages contained within the record. 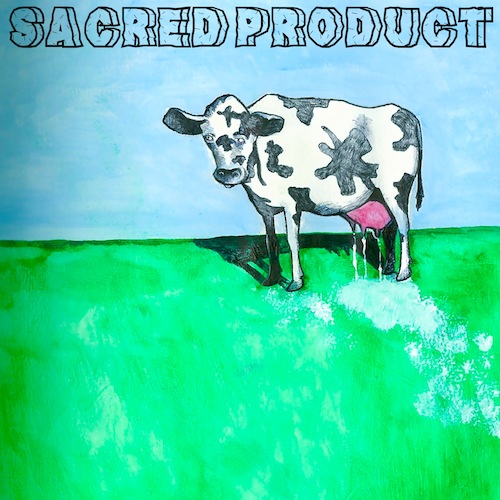 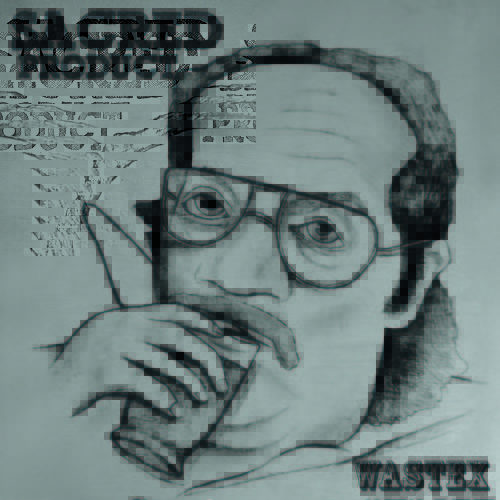 Would you say you ‘fit’ within Melbourne’s music scene, or do you see yourself as more on the fringe? Is there any advantages to being a band in Australia, as opposed to New Zealand. Any drawbacks?

I prefer the scene in Australia to what is going on in New Zealand at the moment. I grew up seeing a lot of awesome music as a young man, but I feel the culture back home is generally retrospective and is not supporting the current innovators. Instead we are constantly told about the great things that emanated from the 1980s. Some of it is very inspiring, but things need to get with the times. I feel Melbourne and Australians in general within the ‘underock’ scenes are very supportive and enthusiastic in actively nurturing the things happening now. I find this most encouraging and in turn I want to see others excel in their craft.

In this way I would say I fit within the Melbourne music scene. More in the spirit of getting things done rather than sounding similar to other practitioners, and I do prefer to work within a diverse music scene rather than be part of a bumflap wearing tribe. So yes, it is a lot easier. Without the support of Albert’s Basement, Mad Nanna and Heinous Anus among others I would probably still be making ten CD-Rs of my music and guiltily trying to swap them for beer at the pub!

The other thing is that people over here are unashamed about asking me what the songs are about and singing along, which beats having five people reluctantly pay two dollars for a show back in New Zealand  with their arms crossed! Another thing is that the wages over here make it an easier possibility of touring overseas which I find exciting.

Could you pinpoint a particular song of yours and explain what it is about?

‘Cup of the Great Eagle’ is the name that Peter the Great – a notorious tsar of Russia during the 16th century – gave his immensely intimidating drinking vessel. According to the historical biography written by Henry Troyat he would make visiting diplomats drink straight vodka from this cup to the point of vomiting. Peter’s court was apparently well known for eating, drinking and sex binges. He’d also make fun of the clergy by forcing them to have public sex in front of everyone. It seems like diplomatic politics during his reign far surpassed Led Zeppelin’s most disgusting moments, with the main difference being the threat of execution. In those days a sign of being a man was based on consumption, and it also tied in with the idea that the more someone could eat the healthier and more vital they were.

Peter the Great is also known as the father of modern Russia and he extended his territory greatly into Siberia and also had a passion for building a naval fleet. He’s a larger than life character – probably made larger through consecutive storytelling – and he seems an interesting counterpoint to these currently ‘voted in’ baby holding photo op grey men who represent private banking interests in the name of politics.