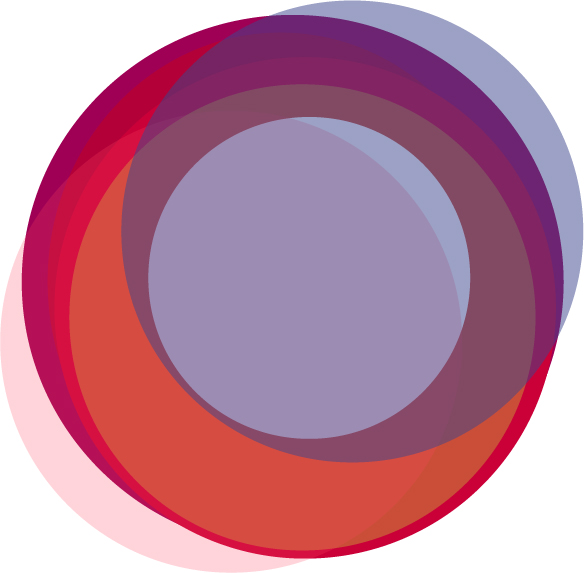 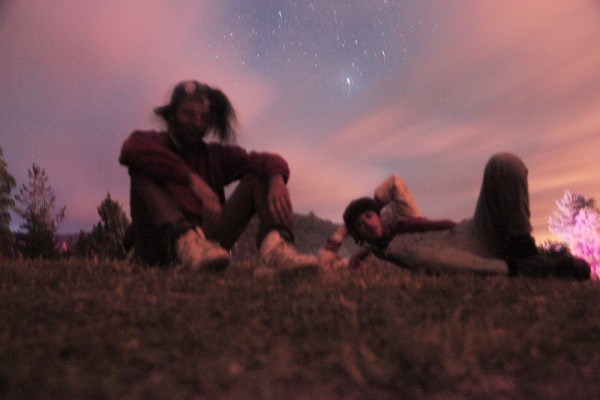 This year I’ve become obsessed with things that are primal and futuristic at the same time and most of my favourite artists are organically getting better at nailing this with every release. 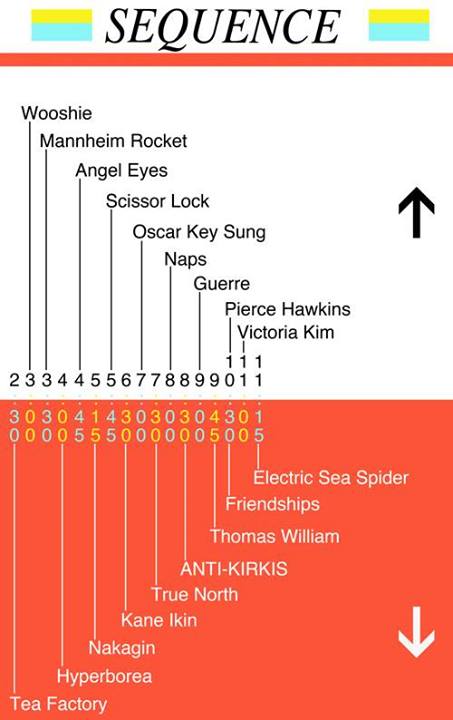 Many musicians though have become caught up with eliminating the risk/human element from their live performance and are set on showing the audience ‘perfection.’ When you are only thinking about the way the music is affecting the audience and you don’t challenge yourself on stage/you aren’t affected by your own show, you end up with no where to move as a performer. Will Farrier toyed with this idea brilliantly this year by dropping “be your own back up dancer” and “less instruments, more dancing.” It is one of my favourite things to watch the way a musician’s body moves to their own music.

In Brisbane people dance. Andrew Mclellan (Cured Pink) especially blew me away this year with his dance floor antics. The quick jerky flicking of his limbs and the odd clapping of his wrists behind his back doesn’t remind me of anything. Cured Pink were also the most unique dance band of the year and my favourite heckling was during their 7 inch launch. After the first song Andrew said to the sound guy ‘if it’s too distorted I’m pulling it back.’ Scraps then yelled out ‘pull your foreskin back’ before walking outside.

It was great this winter in Brisbane seeing my friend’s bands go further and further off in their own directions, on their own terms, honing their personal flavours. Australia hasn’t had many truly captivating/confronting front men over the last 10 years but Glan Schenau (Per Purpose) and Bobby Vagg (The Wonderfuls) are. Bobby has really become The Wonderful’s singer this year 24hrs a day 7 days a week. Glan is also the most primal drummer I have ever seen, he looks like he has never seen anyone play the drums or even seen a drum kit before. Glan’s persona in Cured Pink and Per Purpose is accentuated by the always-on-the-edge-of-time Mitch Perkins who looks like he is from every town in Australia and in every trade.

Then there’s Matt Earle who is the only guitarist in the world that you can tell who it is as soon as he picks up the guitar. For me it seems like it is all coming from a different place in his heart to other musicians. It’s common knowledge amongst Crawlspace readers that he is a one-of-a-kind artist and someone that you need to see, but i think even in Brisbane people don’t realise that he is going deeper and getting better all the time. No matter how fast or slow he is playing there seems to be an earthy calmness about what’s going on. His and Nicola Morton’s home Real Bad Music has become the heart of Brisbane music and alongside North Street Cafe the best place to play in Australia. You learn a lot about your own music from playing there. Matt and Nicola haven given many plants a place to shine that are considered weeds everywhere else, similarly to the people who come to Real Bad shows.

Nth Wheel had this to say after his show there: “Real Bad Music made me feel closer to earth and also one huge step closer to death. Playing there was the richest musical experience I have ever had. It melted away the insect life I had been living in Melbourne – the ugly, modern kind, where everything is timed, everything is out of step, and only Henge Beat can give you a hard-on.”

Scrabble are a band who grew out of the Real Bad crew and who still practise there. The Bek Moore (Clag) fronted act were the first band I saw on moving to Brisbane and you will never see a band that encompasses the soul of a city the way this band does. It is very surprising that in a Western country where we live largely online, with sounds and feelings becoming so globalized, that a band has arrived who reek so hard of the streets of their own city. Their drummer Emily Wade – when discussing how weird it would be to see Scrabble play outside Brisbane – described her band as a group of spasmodic patriarchs. Watch out for their debut release early next year, I’ve heard the recordings and it’s fucking awesome.

Brisbane is incredible at documenting itself, you have Matt Kennedy, Josh Watson and Merl Beauregard’s videos, Glan Schenau (with one hand) and Marek Rygielski (with two) taking photos, Matt Earle recording everything, Brendan Annesley was writing about it all and half the people in the community have their own radio shows on 4zzz including the guilty red queen Makeda Zucco. In this tight knit community you learn very early on how different everyone is to each other as small talk hardly exists. But there is certainly a feeling of sexual frustration in the air, people often feel it’s out of the question to hook up with someone else in the scene. This feeling has bred some of their best music though. What will happen now that Tinder is in town?

Over in Europe, love in music is being explored in new ways by Dean Blunt and Inga Copeland, both as solo acts and as Hype Williams. How did a man and woman manage to put together sets of music about their own break up and be singing to each other about how they feel about it. These are some of the most intense feelings you can have and if you can properly reflect this together through your art you are in some special territory. Having gone through an intense break up this year myself with Rhianna B Dunn I haven’t connected with anything better lately than Hype Williams.

When I listen to their 2013 solo releases I get off on the fact that it feels like something is missing or when Dean Blunt uses another female vocalist that they can’t touch Inga, because that’s exactly what it’s like when you are trying to get over someone you are infatuated with.

On one side of the spectrum this year we have politicians doing their best to be extra careful to reveal nothing to the media, telling boring stories that are not worth anyone’s time. On the other side we have celebrities such as Kanye West and Russell Brand who are saying exactly what is on their mind no matter how bold those ideas are. This is extremely positive as bigger questions are being asked and in Kanye’s case answers given. While Kanye spends too much time in interviews complaining about people writing him off and claiming credit for things, the impact of him coming out with things like “I am a god” and “I’m the number one rockstar on the planet” is huge. Publicists have even come round and realised that when their artist is straight up in interviews, the wider media actually gives a shit and for better or worse everyone is talking about them. This will lead to continually more honest information and better stories being put out in the open. We as artists will be able to look at ourselves and our art from new angles, in turn make better art.

People are starting to become less interested in modesty/lying and are beginning to realise how attractive exposing yourself actually is. Toning down you’re ideas about yourself around other people is ridiculous, when I’m talking to someone all I want to know is exactly what they are thinking.

Most musicians these days spend more time thinking about how many Facebook likes they have than playing music. This is a strange phenomenon and will continue to get even stranger now that we live in a world where it is cheap and easy to buy thousands of Facebook likes, Youtube views and Twitter followers. And it is true that a majority of the people at each level of the music industry care more about these things than how unique/honest/catchy the music is. You are more likely to get that record deal or be invited to play at that festival (excluding Camp A Low Hum) if you decided to spend $70 dollars on buying 3000 Facebook likes the week before.

But when you start heading down this path of faking it and your online presence is no longer an extension of your creative process, you will start asking yourself questions like “it is alright to lie about how many fans we have, but the music is still honest right?” slowly resulting in a spiral of compromises. If you are going to get involved in this kind of business you may as well go all the way and start a band that explores the possibilities of lying and self-promotion – beginning with a Kickstarter campaign to buy Facebook likes: Accelerationism.

Many people this year whether they are aware of it or not have been involved in accelerating the life of capitalism. Whether it’s wearing a Coca Cola shirt, being on an iPhone throughout the entire first song of your album launch or asking the audience to like you on Tinder. I even find myself making up arguments for people who wanna wear Google shirts. When someone says to them “you can’t wear that shirt, Google is evil man.” they can reply “what are you talking about, that’s my hood bro.”

James Ferraro has been at the forefront of all the hyper-capitalist stuff, through his art he is successfully using the big corporations instead of being used by them. Through the sounds and moods of today Ferraro continues to push the limits of reflecting the world and himself at the same time.

The most important thing that Ferraro has done is make us realise that it is a special time to be alive and that it is possible to make music that sounds like now.

People’s fascination with vintage, wanting to be a alive in the ‘60s and ‘70s and the idea that there is no fresh music being made anymore is fading. People are starting to live more in the moment and that is one of the best things that can happen to anything, including music. This has led to a more holistic embrace of technology and things becoming part of pop culture quicker than ever. As equipment continues to become more user friendly new breeds of musicians are finding unique avenues of honest expression. I had many moments this year – lost in Soundcloud dens – when the feeling came over me  “wow so many incredible songs were made today.” We are getting better at making music.

Back to contents page