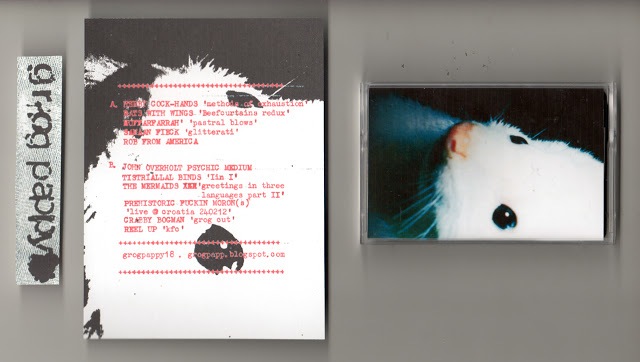 John Overholt was a psychic medium and “spiritual healer” based in Newcastle, New South Wales. He specialised in “energy clearing” of homes and offices, and he was an Aroc Master for whatever that’s worth. His work was not substantiated by science and it was not rational. It was buoyed by superstition. It’s probably true that among the enlightened and educated he was considered a fraud, though his penetration of that market – his presence among the sceptical – was likely marginal at best. But do you know who John Overholt is? What was he doing? And was it comforting to know he existed?

Overholt passed away last year after a battle with cancer, but he’s immortalised (in a fashion) on this Grog Pappy compilation. His moment here is interstitial: the fact of his speaking is all we have. His actual words are manipulated beyond comprehension: we only know it’s him because the 40 second track is called ‘John Overholt Psychic Medium’. It’s not attributed to anyone else. Overholt was an unusual guy with a strange trade in a small city, but who knows what kind of alchemy he worked on his audiences. He probably changed lives, maybe. Here he’s a mockery.

This compilation is not important in any meaningful sense of the term. These eleven tracks are offered with no context in the form of liner notes, and most of the artist names you can’t even Google. These sounds are only rendered important because some guy put them on a tape and sold it on his blog. You can buy it, therefore it is. Some of the names are familiar (Rats With Wings, Moffarfarrah, The Mermaids, Prehistoric Fuckin Moron) but only to like, fifty people. I think it’s safe to say that by most units of measurement, Ferret is absolutely meaningless. To your mum and John Brown at the servo, these tracks are like a fish out of water, flailing pathetically, making a mess in that moment, probably bleeding from the eye. It won’t hold up to the world’s scrutiny: it will be laughed off and rejected, like most protests. There’s no cohesion, no goal, no purpose. Eleven arbitrarily united assaults by eleven different people. Whatever. Who cares.

There are plenty of routes you can take to explain this music, but most of the time Ferret sounds like the folk art of an age obsessed with filth and decay. It doesn’t need a purpose. For example: Rats With Wings’ ‘Beefcurtains Redux’ sounds sickenly yet, somehow, innocently pornographic. It feels like a confused, postmillennial culmination of instincts: it knows that horror shares prime time with moral servitude in most 21st century loungerooms, it knows that you can stream both at the same time, on different screens. It’s paternal, benevolent television rotted at the jaw. And right around the corner, Samaan Fleck is there to depict the frayed nerve endings – the broken circuits – that allow these crossed channels to make sense: a harsh static nothingness, a sound without a core, a heart without a beat, just noise and input. Godly, honey input. It’s a punishment you volunteer to.

Is that what noise music should do, now? Is it important for it to portray the crossed wires of a species that can degrade itself privately and with no remorse, with no recourse to the exploited? What else is it doing, if not that? What systems teach us otherwise! If you look at the blogs that are connected with labels like Grog Pappy – a relentless assault of the terminally fucked and ugly, set against the technicolour splendour of the everyday – then Ferret begins to make sense. Because it’s all noise. Piled corpses and Larry Emdur: that’s the same world. It’s all noise, all input, all titillation.

This noise is resigned to the fact that there’s a tiny distance between what you innocently consume and what you would consume, were it made available to you. It knows you’re ugly, because you are. The things you do are ugly, and the fact you don’t know they’re ugly is uglier. This is music for an age of archived beheadings, animal crush films, men falling from many storeys above, and then dead. It’s for an age of Tony Abbott, where arbiters of morality are always the ugliest leaches of all. It’s for an age of Parks and Recreation animated gifs. It’s the evidence that this horror exists, and the knowledge that you’d watch it again. This is terminal.

And that’s why, when The Mermaids’ godly synth landscapes descend at about the 25 minute mark – all calm pastels, new age purity, a kind of utopian nostalgia – you feel properly confronted. That’s when it’s sad, because real beauty sounds spectral, impossible, transient. It struggles! This surrounding fetid reality is permanent and inescapable, but here you go, here’s some relief. We only have this. John Overholt is a joke. Larry Emdur is a joke. There is no escape. That’s what Ferret sounds like: a putrid curiosity and then a meal at KFC. What else can you do.

Many of the artists on Ferret don’t communicate this anguish on their own: Prehistoric Fuckin Moron’s albums aren’t this debased: they’re colourful and transporting. Moffarfarrah’s recordings don’t normally channel apocalypse to this extent: they’re strange in their own way. But together with Herby Cock-Hands, Tistriallal Binds, Samaan Fleck and The Mermaids, this whole mess of otherwise rotely ‘fascinating’ sound feels epochal. It’s a half-dozen browsers open at once to shady age-blocked blogspots. It’s mess set against mess. It’s a culmination. It’s too much input, and therefore frightening and true. It’s an animated gif of a man eating his own shit.