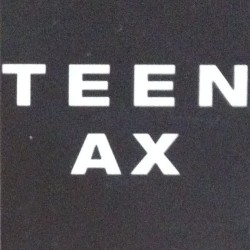 The sonic language of Teen Ax is one that tolerates no ambiguity. There are no subtle inflections of meaning here, and this music can never be decorative or peripheral. Teen Ax is transfixing, but it offers nothing in exchange for your attention: listening to this feels like delighting in obscenities, or marveling at poverty.

A duo based in Sydney, Teen Ax is a practice in distilling the essence of dread. This is the sound of streamed torture, hosted on proxy servers in third world countries. The sound of dinner from a can in a dark room. The sound of only secret pleasures – fascinations to temporarily fend off suspicion, paranoia, weakness. Teen Ax swap between a putrid quiet and a punishingly loud torment, as if mirroring the climaxes of an age addicted to transgression.

There are few working noise groups that communicate filth as vividly as Teen Ax do. This noise is barren, offering neither imagined frontiers nor catharsis. The sound itself is coldly rhythmic and mechanical, such as during ‘Strictly Business,’ or else dankly quiet, as during the molded and decaying silence of ‘Wallflower’. There are moments of true terror too, like ‘The Curtain,’ where the screams amid swiftly recurring drones sound like a pained remorse rather than, say, the purging of some demon. For Teen Ax, there is never a ‘release’. There is no power here, no control. No salvation in anger. Useless is the sound of being crushed underfoot.

And these quieter moments, these compromised silences, sound like an imagination shifting gears slowly in the face of an empty future. It’s during these quieter moments that Teen Ax are at their most dreaded: these are the desolate environments in which all hopeless searches for distraction are birthed. Useless is the rejection of proactivity, of seeking change. Useless sounds like an apocalypse so insidious we didn’t notice it occurring.