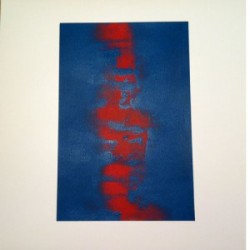 This record sounds the way sunshine looks, shining through a crack in boarded up windows. It’s there in the dark, something broken and on its last waltz, absorbing the last light. Love Chants is two guitars, a drum kit and a spectral voice, dispensing the peripheral concerns of “beauty”: reaching for its simplest elements.

This is similar – but emotionally the opposite – to what Matt Earle does in many of his Breakdance the Dawn affiliated bands. There, music is usually broken down into its harshest sonic essence, all severity and admonishment. Structurally, Love Chants’ music is similarly interesting for what it doesn’t have, but the focus here is on the power of what remains.

And yeah: this is powerful music. It sounds like silence – or absence – colluding with sound, with the latter as the subordinate. Every chord, and each vocalisation, sounds like an achievement: a purposeful will to communicate, while the unsteady percussion works hard to hold it all all up. It’s this sense of something delicate buckling that draws attention to Michael Zulicki’s involvement here, who’s band Mad Nanna also sounds permanently at the edge of a void.

But across its four tracks, Love Chants manages to hold on. It feels like a victory over some conditioned depression or darkness, and the songs only get brighter – more overtly pretty – as the record proceeds, dancing in that one shard of light.