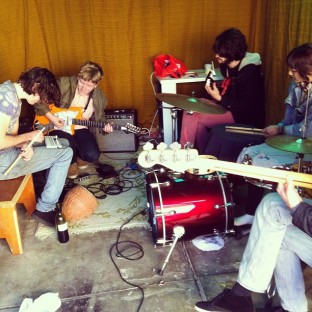 More summer weatherboard ennui from the Melbourne-via-Wollongong group Hot Palms. These guys released a very nice self-titled EP last year, and play a whole lot up and down the east coast. The track below is nominally a ‘demo’, but someone went ahead and made a film clip for it anyway, which is testament to how visually evocative the group is. Seriously, it’s like looking at a faded photograph of your dead aunt brandishing a cake in a stark suburban backyard, dog kennel just up the back, a totem tennis to one side and an old sedan on bricks on the other.

It’s likely that this will turn up on a future Hot Palms release – probably on the Why Don’t You Believe Me? label which the band’s Alec Marshall runs – but in the meantime you can purchase it starting from $0.00 here.