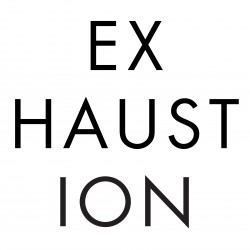 Nothing goes right on Exhaustion’s Future Eaters. It’s a world where quick scams end in tragedy, everyone ends up double-crossed, and life is an inevitable fuck up. It’s brutal and unforgiving, with arrangements so oversized and cinematic that even a minor household spat feels like it’ll come to an apocalyptic end. If there’s a song about an ensuing break-up, Exhaustion makes it feel like you’re being marched into the bush with a rifle pressed against your kidney, with your only funeral service a brief pause after the last shovel of dirt hits the heap. Maybe the doomed chaos that surrounds each track is misleading, but maybe there’s a truth to painting the minutiae of life’s let downs with blood-red hues.

Future Eaters dabbles in the confused and the chaotic, a threat always hiding in the maniacal passage of Duncan Blachford’s guitars (Actual Holes, Snawklor) the writhing bass of Deaf Wish’s Jensen Thjung and the drums of Per Byrstrom (Ooga Boogas).  On ‘Don’t Fly Right’, Blachford perversely grins through another’s fall from grace. “Oh Mama / You used to fly real nice,” he sings. “Now you’ve clipped your wings / And dug yourself a hole.” Later, he struggles with the urge to win back a bet through the taunts of a farmer’s daughter on ‘Keep the Change’; laughs through his lover’s rage, piss and vomit on ‘The Gambler’; and comes to terms with a violent memory passed on ‘Your Memory Don’t Want You.’

That’s not to say the Melbourne trio only touch on fickle themes. The snaking epic ‘Old Mickey’ in particular is flooded with circling levels of fear. Its characters impose themselves before fleeing the scene of a crime, its victim left battered on the side of the road. It’s paired with a demented cover of The Capri’s ‘Moon Out Tonight’, flashing a distant memory of something once beautiful from the devastated aftermath. There’s no doubt the characters are doomed with “sirens getting closer,” but among this horrid scene, they recall the memory of a song once shared. Even Exhaustion’s romances feature blood-stained hands; tender reprieves exist only long enough for them to be hauled away.

With the personnel assembled on this record (Zond’s Justin Fuller also contributes via the outro to ‘No Place For a Holiday’), Future Eaters was always going to have a languid air to it. But it’s also warped and depraved, an uncomfortable listen that’s equal parts as enjoyable as it is horrifying. Use this as a record to dance away from an insuppressible memory.