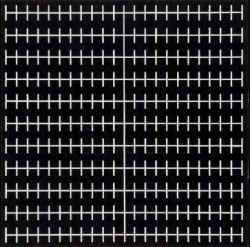 It’s a new year, and little is certain except that Eugene Ward – aka Dro Carey, Fad TMB and Tuff Sherm – will continue to release new music, which is reassuring. Here’s proof: ‘Scope’ is from a forthcoming 12 inch on Templar Sound which will comprise three new tracks from Dro Carey and two from Tuff Sherm. I’m advised that one of the Dro tracks will be ‘Ditko’, except in this instance it’ll be a Oneman cut with sampled TLC vocals. The record’s release window is a bit fuzzy, but it’s looking like it’ll come some time in the first half of the year.

For anyone who downloaded and enjoyed last year’s Shrapnel Maestro, ‘Scope’ will be familiar: it’s techno that’s both functional and pop-oriented, the latter thanks to sampled and manipulated vocals. Listen out for the way Ward raises the stakes towards the end – creates a sense of climax and release – by actually removing elements. Strange as always, but reliably excellent.