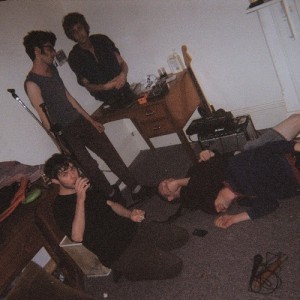 I heard one track from this band (not this one, but ‘I Don’t Care‘) and was going to pass on them, but then ‘Wino Kicker’ came on and it resonated. I’m definitely not on board with kicking winos by any means, but this is a pretty straightforward and very dumb rock song with some odd – and probably accidental – production values. The vocals remind me of an interrupted radio broadcast, or a hostile public broadcasting takeover (see: the Max Headroom incident). It’s a small thing, but it makes a difference.

‘Wino Kicker’ isn’t as good as the band’s bio though:

On Saturday the 5th of May 1979 an unknown band The Revivalists released their debut masterpiece “Potts The Point” to about 30 people.. Three months later they released their second and final album “Doesn’t Cabramatta” to an even lesser number. Both were lost and forgotten until copies somehow reached the ears of young sydney-sider Jack Lee (Beefjerk) twenty-five years later .. Found at the back of a dusty cupboard and listened to three times in his youth.. The records mysteriously disappeared when his family moved house. Relying on vague childhood memories and distinct pop hooks.. Jack Lee played the entirety of the albums (as he remembered them) to Nathan Roche, Dean Adam, Sam Wilkinson, Tristan Winston Price and Lani Crooks on a grand piano late one night in Marrickville. The following day they replicated what they heard as a full band.

The Revisionists are a tribute band to forgotten Aussie punk outfit The Revivalists.

A fascinating and plausible story! The band have two releases forthcoming – a vinyl edition of Potts The Point limited to 40 copies, and then another release in April in the form of Doesn’t Cabramatta. The band doesn’t feature Matt Kennedy of Kitchen’s Floor as the photo above suggests.

One thought on “Listen: The Revisionists – Wino Kicker”