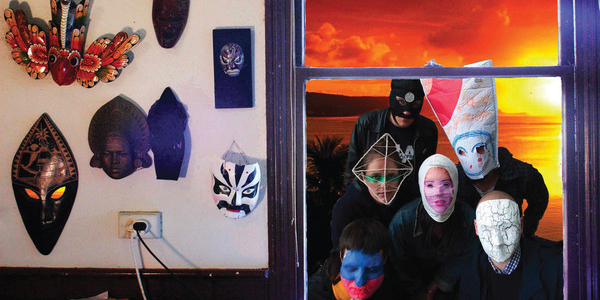 Here are a couple of dilemmas to consider when engaging with, and inevitably embracing UV Race. One is finding a way to describe the Melbourne six-piece as ‘shambolic’ without actually using the word. Another is mentioning vocalist Marcus Rechsteiner’s regional origins without sounding repetitive. Because, for anyone taking even a cursory interest in the chaotic art punk outfit, you’ll doubtless have heard it all before: an eccentric front man from a backwater Victorian town taken to disrobing on stage, while flanked by his motley troupe of musicians and artists, more concerned with their output than its quality. But beneath the obnoxious mess of folly and toilet humour is a powerful sense of compassion based around some astute, though plainly expressed social observations.

At times, Marcus doesn’t even bother finishing his sentences on record while moaning over the hulking clatter of guitars and minimal drumming, “’Went and saw your friends. I told them it had end” in the clumsy heartbreak of ‘Sophie Says’. He even manages to articulate the distribution of power in said relationship in two short sentences: “We were walking. You were talking.” Sure, Marcus doesn’t exactly elaborate on why it is he wants to “take a shit” on the familial unit in ‘Nuclear Family’ but, for anyone who’s ever felt like an outsider, you could probably appreciate the sentiment. And how exactly the title Racism, relates to the album’s songs is anyone’s guess, except that it builds on the band’s love of the odd portmanteau by expanding it from its root to include ‘UV Racism’.

In fact, it’s probably just referencing the band’s positioning as social outcasts, while investing uncanny warmth in their portrayal of their kindred suburban lowlifes. Think about the dude who abandons his wife and kids to live out his days in a public playground in ‘Life Park’. Because let’s face it, he sounds like a bit of an arsehole, but here UV Race celebrate this self-elected return to paradise over a trundling bass line and a rolling keyboard melody, as Marcus sings “I’ve got everything I need”. Then there’s the pre-emptive defence of the guy who sings about his mullet and hemorrhoids in the fittingly vulgar ‘Raw Balls’, as the whole crew holler “oink, oink, oink, oink, oink, oink, oink, OOINK!!!” in the thrusting blitz of ‘I’m a Pig’.

As a band whose power hinges on a considered musical ineptitude, the UV Race’s third album is rife with glimmers of the band’s actual skill levels, but in slicing through the woozy affirmation of ‘Be Yourself’ by a buzzing guitar line, all that really matters is the metaphorical group hug that is this collective sing-a-long. Because as they advance into a diversified sound, from the twinkling chamber pop of ‘Gypsy King’ to the droning build-up of album closer ‘Memenonome’, the UV Race’s main concern is presenting an affectionate tribute to scumbags everywhere in their own brilliant and utterly shameless way.