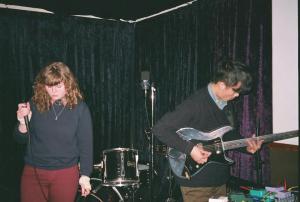 Circular Keys is one of my favourite new bands on account of ‘Eurogrand‘, a quiet sub-aquatic song that is achingly beautiful, even while it hints at something quite frightening – dreadful even. Circular Keys’ sound could easily be lumped among similar movements happening abroad – think Sleep ∞ Over, or even Balam Acab with a bit more murk and a lot less (read: no) pitch-shifting – but the band at hand feels more graciously sentimental, yet at the same time disquietingly distant.

The Melbourne duo hasn’t released anything official yet, though several tracks have appeared on the Circular Keys Bandcamp page over the course of the year. The song at hand was first released at about the same time as ‘Eurogrand’, though this film clip is brand new. Directed by Anna Skoekstra, it’s considerably different in tone to ‘Eurogrand’s comparatively lo-fi clip, but despite its sharper edges it captures a similar edge-of-dream state befitting the drowsy pulses at the heart of the duo’s music.