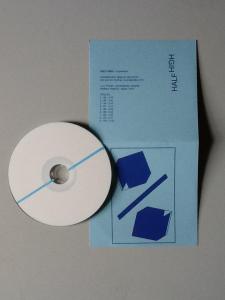 As we pointed out back in August, Half High is a new project for Lucy Phelan and Matthew Hopkins of Naked on the Vague. The duo released a promo video earlier this year which showcased their newly tense and eldritch synth compositions – accompanied by haunted visages of a very malevolent looking clock face. The duo has finally released a CD-R independently called Suspension, and yes, the clock track features on it (it’s the opener) but today we’re going to show you something new from the disc, which was recorded in Gent, Belgium and then compiled back in Sydney.

We’ll be back with a proper review of this debut so we don’t want to waste too many of our precious similes and adjectives, but on first listen the album’s sixth track (the tracks are nameless) stood out the most. The track puts me in mind of some of Mordant Music‘s Tower recordings, and relatedly, the three-disc Thanet album Receiving Calls from a couple of years back. But vague comparisons be damned, this is just beautiful. Haunted secret gardens and the brambled cliff faces that wall them in.

The CD-R will soon be available at Repressed Records and Pigeon Ground in Sydney, and Wooly Bully in Melbourne. You can order through Albert’s Basement, or email the band directly at matthewphiliphopkins [at] gmail [dot] com .

In related news, Lucy from Half High is playing a show in Sydney this Friday night alongside Michael Ozone, Matthew Brown and Pettigrew. The night after, Matt’s other duo Four Door (with Jonathan Hochman of Holy Balm) will play Goodgod Small Club with Catcall and Model Citizen.