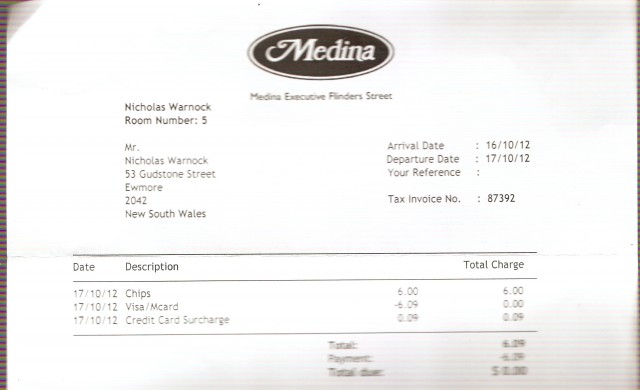 A receipt for a $6 packet of chips from Melbourne’s Medina hotel. Relevant, because that’s a bloody rip-off.

So a representative of Crawlspace casually asked me to report on my Jagermeister Independent Music Award experience. They were probably half joking but it was such a bizarre night, with an even more bizarre aftermath, that I thought why the hell not. I went down as a representative of Royal Headache: I’m not in the band, I’m not their manager, I just run the record label R.I.P Society. Law, Joe and Shortty couldn’t get off work to attend the award ceremony, leaving the two free flights and room in the Medina on Flinders Street for Shogun and myself. I was hoping to do a really critical and impassioned spiel but after being exposed to the indie elite and a live performance by Loon Lake I have this deflated, hopeless feeling looming inside. Let’s see how this goes, sorry in advance.

For those that don’t know, AIR is the Australian Independent Record Labels Association. The next bit was copied from their website: “Now in their seventh year, The JAGERMEISTER INDEPENDENT MUSIC AWARDS is an opportunity for Australian labels, artists and the Industry at large to celebrate the successes of some of the country’s most vibrant and eclectic artists. With a diverse pool of representatives voting this year, from online media, music press, broadcasters, independent music industry representatives and artists themselves, the results will truly reflect the opinions of the collective Independent Music scene.”

For the record I think that AIR is a great organization. They are the good guys. It’s not AIR’s fault the prevalent music culture (even on an independent level) in this country is so bland.

Royal Headache was up for the Best Independent Artist, Best Independent Album and Breakthrough Artist of the Year awards. Shogun and I flew into Melbourne early Tuesday morning, took a shuttle bus to the Medina on Flinders Street with fellow nominees and a few dancers. We listened to the first Generation X album, had a nap, got a few beers, listened to Kool Keith, Negative Approach and Antidote before heading over to the event. It’s important I mention these bands so you know we’re cool.

We arrived at the venue at about 6.30pm via public transport; it was pissing down rain outside yet we seemed to be the only people that were wet. Shogun and I were interviewed by a few media outlets, usually resulting in Shogun stating he doesn’t really know much about the award or other nominees but was thankful, gracious and polite, followed by me ranting for 20 minutes about how I think most of the nominees contribution to culture are on par with 50 Shades Of Grey or Vagazzling. Actually that’s probably making them sound raunchier and more exciting than they are, “a bunch of bands that sound like music from tampon ads” as a friend said is more like it.

We were late to getting a seat for the actual ceremony as I was trying to grab as much booze as possible. I knew I was going to need it to get through this celebration of the country’s most vibrant and eclectic artists. From previous experiences I also knew that Jaaaagermiester is an excellent mental lubricant that would allow the punk portion of my brain to move to the front of my skull, blocking all signals from the sensible adult behavior department. The main man behind the Elefant Traks label gave an excellent opening address, his idea of what the essential qualities of independent music culture seemed very in line with my own: basically creating your own culture from the ground up. Unfortunately this theme did not run strong throughout the night, bringing me to a fairly controversial segment of the night.

Lanie Lane was accepting an award for best Blues And Roots Album and as she thanked her label Ivy League I saw a great window of opportunity to yell “not independent”. This was greeted with a bunch of grumbling and maybe even a tiny bit of shock ‘n’ awe. I didn’t enter the award ceremony with a vendetta against Ivy League; this was a jovial, spur of the moment reaction. Whether Ivy League are independent or not is not really something I dwell on as Ivy League (and a great deal of the labels present at the AIR Awards) are so removed from any affecting independent music culture past or present that it seems irrelevant to discuss. But I guess as this comment apparently re-sparked some debate on “what is independent”, I should probably expand on my drunken heckle.

Contrasting definitions of independent aside, Ivy League does not operate in any way, shape or form like an independent record label. There is no creative idealism or attempt to foster any type of collective /counter culture, nor has there ever been from what I can see. Ivy League basically picks an act and has the resources to ensure they will be somewhat prevalent in the Australian music landscape. I’ve seen Ivy League acts play to modest sized audiences yet still the label manages to construct this very confident, successful presence around the group. They have the tools and resources to sculpt an artist to convince mass-culture (or semi-mass culture?). Kudos to Ivy League for being great at what you do but in my mind (a mind I think is fit to make comment having put every other aspect of my adult life secondary to independent music culture) you don’t have any cultural agenda or agenda beyond the success of each individual artist. I’m not saying you’re invalid, you’re just not an independent record label.

Okay, so after Elaine finished her speech 360 won and said he didn’t deserve it. Seemed like a pretty solid dude, no joke. Some other people won and said stuff. Paul Kelly played and it was rad. I don’t think I really need to report on the rest, this thing is getting too long, also I can’t remember a lot of it. Thinking about Loon Lake’s performance makes me feel depressed. Probably shows how out of touch I am with your average Australian but I can’t imagine an adult listening to this music. At least an adult that has experienced any aspect of real life, from falling in love to having diarrhoea.

Other than Royal Headache winning the album of the year award the main outcome of this night for me was the conclusion that a great deal of the music that was up for nomination is actually detrimental to humanity. I’m speaking mostly about the stuff that might get classified as “indie”. It promotes this unimpassioned, grey, overly stylized approach to creating music that is so devoid of any unbridled emotion, personality, interesting insight into the human condition or, ummmmm, actual art. It’s not a Fred Durst, steampunk or Christian metal type of awful, it’s a more subtle awful. Accessory music awful. Projecting onto society that this is the stifled way you’re actually supposed to create and communicate. I can’t relate to any of this shit, and I’ve got a feeling most people in the room knew what was being celebrated was just more industry fodder to be embarrassed about in a few years time.

58 thoughts on “R.I.P Society Vs. The Jagermeister Indie Music Awards”