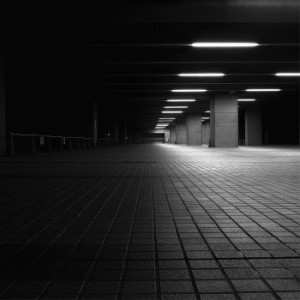 Sagittarian Domain plays like the grim soundtrack to some lost, spartan German sci-fi film from the ’70s. It instills a prolonged and potent sense of paranoia that lingers just out of sight, like the presence of some shadowy figure echoing your footsteps as you gradually hasten down a darkened alley.

It’s considerably different to anything Oren Ambarchi has released before, and may stand as a singular anomaly for his future releases as well. In some ways, it resembles the track ‘Knots’ from Audience of One, which came out in March – it’s a single long-form piece, lasting around half-an-hour, that takes its time to get where it’s going, dazzling you with the depth and detail of its arrangement along the way. On the otherhand, it’s significantly different to ‘Knots’ – its backbone is a single synth note that pulses in the dark lower registers of the instrument, mirrored by a primitive, shuffling drum machine that ekes out an impassive krautrock pace. Snagged in between these is Ambarchi himself, doubling the rhythm on an acoustic kit.

What makes Sagittarian Domain’s atmosphere so exhilarating and intoxicating is the flailing human element at its core. While Ambarchi’s textural guitar histrionics are imposing and sepulchral throughout, the drummer at the centre of the piece feels vulnerable and panicked in their company. The percussion sounds as though it’s been played live, in one take, and its slight imperfections – a missed hit, a tiny gap in the pattern as the player pauses to take stock – lend the impression of a person tiring, almost stumbling, as they try to escape the faceless things that swoop down and ooze in from the peripheries.

As with most of his work, beautiful ‘new’ detail reveals itself with repeat listens – but you might not find yourself needing to return to it. So potent is the malicious ambience of the piece, and so lush and extraordinary is the sanctuary it reaches in closing, that it exists particularly well as an idea, an abstract narrative. Listen once, and the heady world of the track will be with you whenever you think of it – its airless tension and unexpected catharsis only a thought away, floating in your subconscious like a perfectly dark jewel.