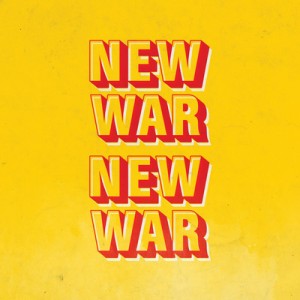 Just as the New Ordinary is taking hold in the Australian underground, as the parading of the mundane becomes self-reflexive and the slight becomes stylised, New War banish the shambolic. On their self-titled debut album the Melbourne quartet harness menace and display focus – purposefulness has rarely felt so invigorating, and little on this album sounds extraneous or second guessed. New War is a reminder that music can be designed and crafted, that it can have an authorial voice, if there’s a genuine sense of deeply felt expression underpinning it. That is not something lacking with this record.

The world exists on these songs; it doesn’t merely end at the local bottle shop. Or maybe it existed. The end of things – people, places, institutions, belief systems – permeates the nine tracks, happening slowly and with a sense of decay that turns Jesse Shepherd’s spectral keyboards into a kind of requiem. On ‘Ghostwalking’ Chris Pugmire moves through debt collapse, the loss of bees and the destruction of the seas, and as he sings language becomes a virus, each line a self-contained helix. “Sleights of acid dealt by trawling hands,” he notes, and the imagery is fetid and suggestive.

These songs are rich in ideas, in both aesthetic and word. You can organise them under various taxonomies, but the band start from the foundation of Steve Masterson’s often merciless drumming and the starkly supple bass of Melissa Lock, which like much of this album is accommodating to the point where the comfortable is confronting. The caterwauling ‘Black Site Cantos’ recalls The Birthday Party, while the tribal drumming and sheet noise blasts of ‘Slim Dandy’ suggest vintage no wave disco, but comparisons only tell a partial story.

New War have a talent for cohesive transformation, for repurposing the past for the now, and in such circumstances the clean, tundra-like production from Lindsay Gravina makes sense. They know what they want to do. Songs such as the lean, hypnotic ‘Calling From the Inside’, which ends with repeated invocations of massacre, doesn’t need to be encrypted and obscured. Without being obvious, or abandoning the value of interpretation, New War gives you everything you need to render judgment. You can look in their mirror or look away.

Read our interview with New War.