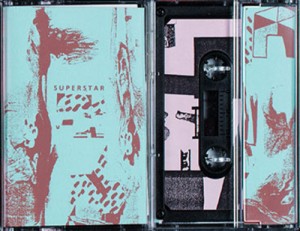 As an exercise in objectivity (!), let’s pretend for a moment that Superstar isn’t a Melbourne duo with a well-established reputation. Let’s pretend that we don’t know who they’ve shared bills with, nor which labels have released their music. Pretend for a moment that Superstar play at the Canterbury RSL every first Tuesday of the month, and you get a free beer token if you sign in before 8.

Now, listen to the track embedded below, ‘Fine Wine’, and wonder how we got here; how music this uncompromisingly smooth emerged from a band that has played with groups like Naked on the Vague, and released music on a label [Night People] that has vendored its fair share of rough as guts music in the past.

Superstar is a pretty uncomplicated outfit: there’s a drum machine, gorgeously smooth synth pads, reverberated electric guitar lead playing, and Esther Edquist’s vocals, who forms half of this group alongside Kieran Hegarty. Maybe it’s just me, but some of Superstar’s music is deeply sad, somehow, in its uncomplicated textural splendour. It’s very adult, very sentimental, and all about “feelings”. It seems indebted to all manner of classic 1980s MOR, but there’s no ironic distance here, like you’d expect from a modern band plumbing those depths. Superstar’s music is, unaccountably – unusually – exactly what it is.

And yet, when Esquist introduces the third track, ‘Fine Wine’ (from their forthcoming LP A Toast To… Superstar) she laughs at how naff the title is, and it kinda feels like she’s laughing at, by extension, the whole operation. But Esquist’s vocals are at their most heartbreaking during ‘Fine Wine’: spectral and soulful, buried perfectly in the mix to sound like a distant siren on a remote beach at night. This live tape delivers the best – fidelity wise – idea of what Superstar do yet, and offers some mental preparation as to what we’ll hear on their debut. Just don’t let what you think they are get in the way, because this is very pretty music indeed. Evidently, that’s all it wants to be.