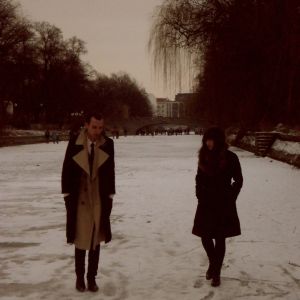 Tropical goth is the vaguely disparaging term used by White Hex’s European label to describe this debut. The “tropical” adjunct is only meaningful if you hold that goth is all asphyxiating corsets and Renaissance roleplaying, which White Hex is definitely not. Closer to home, if you’ve ever sat on a Redfern veranda at 7:30am huffing from a bottle of amyl nitrate while listening to Black Tape For a Blue Girl CDs, maybe that’s a stereotype more befitting this particular group.

Whatever the case, Heat is very lethargic, very grey, and almost ominously seductive. The duo, consisting Tara Green and Jimi Kritzler, create the type of music readily licensable to teen flicks with a morality tale about designer drugs at their core: it’s just so resigned, so “coming down”, and it creates that mood with relish. Green’s vocals sound equal parts cynical and dreamy, while Kritzler’s guitar – reminiscent of his work in Slug Guts – run slow melodic arcs over a drum machine, all the while accompanied by a bassline with a mind of its own. It feels very dry initially, but those slowly unfolding melodies do sink in over time.

Heat feels like a triumph of style over substance, but in this case that’s not a slight, because style and mood is clearly the goal here anyway. This record conjures images and states but it doesn’t hold forth about them. Glassy eyed and sedate, Heat is a pitch dark room on a sunny day. The world is out there, you feel a dread for not engaging, yet you’re not going to move a muscle. Don’t listen to this on the way to the train station, but do listen.