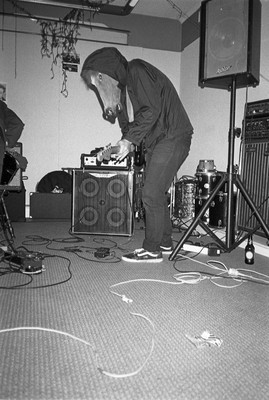 I don’t know anything about Teen Ax except that the two-piece are based in Sydney and they had a cassette released last year on Confirmation Tapes, a label that put out a pretty awesome Prehistoric Fuckin’ Moron and Cock Safari split a while back.

Anyway, as you can probably gather, everything is not at peace in the world of Teen Ax. ‘Strictly Business’ is anything but. After a channel-hopping intro we’re immediately transported into a curtains-drawn lounge room, and the stench of mold and tobacco lingers. If Golem were a disenfranchised social welfare recipient huffing the dregs of bucket bongs on a weekday, and then murdering neighbourhood cats for fun during the night, he’d probably be the vocalist for this band at the weekend. That’s what the vocals here sound like anyway: very ugly.

Listen to some Blue Nile afterwards if you just can’t take it anymore. That’s what I did.