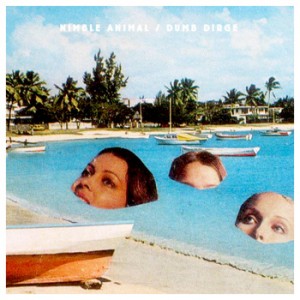 It makes perfect sense that cassettes have returned as the underground medium of choice. They are a still-analogue, cheap-as-chips middle ground between the price of vinyl and the aural poker face of digital audio, with its exhaustively labyrinthine array of formats. The best thing about them is how weirdly fragile they are. The ribbon of a cassette tape seems singularly prone to sonic destruction and manipulation. If you shake a Walkman, it comically modulates whatever you’re listening to. If you leave a tape in the sun, its contents audibly degrade.

I used to have a series of excellent mix tapes that lived in my (now trashed) ’93 Ford Festiva Trio. I’d heard little of the music on these when they were given to me, and loved them dearly, but couldn’t listen to them in any other environment. Every time a musician friend got into the car with me, they’d notice how these songs, familiar to them, had been mutilated as they baked in the glove box. Some tracks had slowed, and their pitches had altered to slumberous paces. Others wobbled inexplicably. There was erroneous flange. It was great. When I finally bought all this stuff on CD, many years later, I didn’t like the songs anywhere near as much. They sounded nothing like I remembered them, all clean, well recorded, faithfully rendered. Fuck that.

I suspect Dominic Stephens might like tapes for the same reasons I do. Nimble Animal is the moniker for his recent solo work outside of the excellent Brisbane quartet Oh Ye Denver Birds. His first album, Dumb Dirge, seems to lust over the happy accidents that sometimes arise from the fragility and novel malleability of magnetic tape. Thankfully, it leans away from the vogue of letting the sound of tape colour the music as a whole. Instead, the presence of tape is implied throughout the record. It seems to benefit from the turgid fidelity and punchy compression that cassettes sometimes lend to the material they hold, and the sonic excrescences of the medium are used as textural features in the arrangements – characterful landmarks to pass and marvel at on your way through each track.

‘Mud’ glistens with such things – pealing backwards tape loops and sparking rifts of sonic clutter – each laced across a bed of obscured synth, supine and shimmering like sunlight off distant water. The stoned plod of the rhythm track doesn’t go anywhere, but it has no need to, choosing instead to wallow in its own sublime stasis. It’s mutedly, almost comically cosmic.

‘Raeli’ is infuriatingly disjointed, its plastic organ, flaccid hip-hop beat and waltzing guitar only just cohere, playing out in their own vaguely related time signatures. It sounds like several deliberately uncoordinated tracks of tape, all spooling out together with only the most perfunctory of relation. Miniature oases of colour flicker forth occasionally, haunting the peripheries of the track like gremlins. It’s frustrating and intoxicating, and completely unlike anything else I’ve heard this year.

This album would be lovely enough if it consisted entirely of such gloriously singular instrumentals, but its best moments are songs. The loping swoon of ‘Luvbel’ seems to come from nowhere, waltzing gracefully out of enigmatic synth-harp arpeggios. Its viscous, lovestruck melody and mood lingers long after you get up and walk out of the room. The clipped metronome of the epic ‘Yabbies’ grounds some vertiginous drones, before dissolving into pulsing krautrock revelry. ‘XIX’ nabs the infectious gait of Panda Bear’s ‘Last Night At The Jetty’, wresting it into a tartly mournful deconstruction of synth-obsessed ’80s chart rock. It’s the closest thing this album has to a single – such a shame that it should fail to make the playlist of even the most liberal-minded local community stations.

Dumb Dirge alludes to and draws on many different things – the meditative stasis of Sun Araw, the bristling pop of Animal Collective, the aquatic miniatures of Jürgen Muller – but it’s doggedly sui generis. And it’s free to download, if you want it. You can buy it on tape, too.