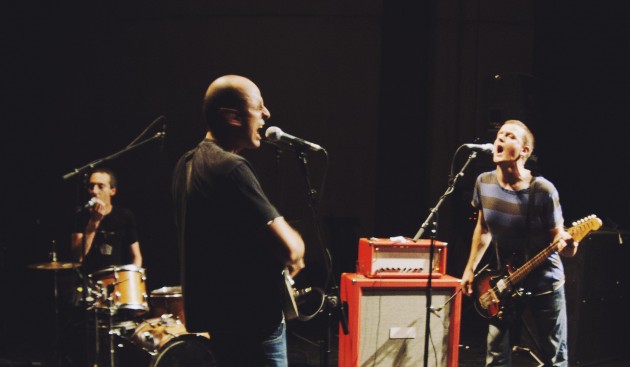 Nik Kamvissis, one third of Sydney group Menstruation Sisters, exists to me as some kind of reactive spirit guide to the surreal. He is submerged in a world that exists along a frequency only few understand. His creative work, both in the realm of music and visual art, eludes both radiance and destruction. The magic in his performances lies in the fact that it’s all natural and no farce. The spectrum of sound he creates, primarily through voice, is unlike any other: he channels a supreme instinct that is highly his own.

In our current world amid the industry of culture, most creative works are made to be disposable: to serve a wider financial or social purpose. Listening to Menstruation Sisters – Kamvissis’s primary musical project – illuminates this fact because by contrast it leaves an imprint. It feels as though the work has been made for you and no one else. I see Kamvissis’s output as a bodily function, exerting itself with no control or warning, something essential to his life.

The initial interview I had planned was in person, at Kamvissis’s home. We sat down to watch a film first: Dennis Hopper’s Out of the Blue. We watched the first 15 minutes, until the girl, our hero, is singing to herself in a greenhouse. It’s a nice image to end on. This moved into a discussion of our mutual interest in film, particularly of Cassavettes and Fassbinder. While chatting about David Cronenberg, I realised that although a fan, for me his films are almost too putrid, too abject. Although the images and themes portrayed deal mostly with contrasting realities and the flesh meeting mechanical, it seems like it could be a situation that could be played out in some future everyday life. When I say this, I am referring to the aesthetic of Existenz in particular – the fleshy bodies, limbs out of control –  At one with human elements and the limits of reality and the rules of morality, pragmatism. An intense yet imaginable proposition.

This discussion is what leads me to Menstruation Sisters and Nik’s greater artistic vision – exploring and expanding these barriers of what one can imagine sonically and melodically. Along with collaborators Oren Ambarchi and Brendan Walls, who at current form an unstoppable dynamic of three, the power of Menstruation Sisters lies, for me, in the fact that the project is solely intuitive. It is physical and expressive rather than ‘composed’. This condition is why the project is so powerful. Through this form, they are pushing music to what it should be more and never seems to be, especially in these times: dangerous, unsteady and heading towards an uncertain end.

I accidentally taped over our one hour interview. The lost hour was a chat about the recording processes Menstruation Sisters go through in order to create their full length releases MA and Samantha, My Wack Panther. I was curious to learn that they improvise in the studio, meticulously pulling out the best components of each session, creating tracks and then finally songs and then a live set learned from the recording sessions. This almost seems like a more expressive, pure, intuitive form of making a record – rather than trying to emulate a live experience in the finest detail. We corresponded over email later on, which proved to be more of a success.

Samantha, My Wack Panther, pictured above, was originally released in 2009 through Ecstatic Peace!

As you’ve been playing music for so many years, has your relationship with it changed as you’ve got older? Do you feel that is has been a progressive, constant experience, or something that fluctuates?
It’s one interrupted rollercoaster ride, a broken down love/hate relationship. It’s provided me with many thrills along the way but only now can I fully appreciate the value of all the mayhem. Age has helped fade the hate away. I treasure the band.

I wanted to ask you about the relationship between your visual art and your music. Do they influence and inform one another, or do you find they are separate, unrelated entities?
Both are deeply improvisational practises, and no songs or drawings are composed beforehand. It’s more a searching, for an idea or a vibe, and once contact with a sound or visual has been made, that triggers a desire to create with it. It becomes a give and take practise until the desire has been fulfilled. A guitar solo can so easily inspire a rhythm, an energy which is used to draw with, and vice versa. I love the psychedelic and punk visuals from the rock record covers as well as being influenced by fine art. I am consistently with them both and I’m sure they are working together in ways I’m not even that aware of.

I see your music and art as extremely personal. Is this true? How does expressing yourself to the public, particularly through Menstruation Sisters live shows and recordings, effect you and your output?
Not too sure what you mean by personal. It’s just music and visuals which are very much influenced by many things, some I’m aware of and some not – ideas, practices, feelings and forces which have been around and developing for thousands of years. These musical and visual ideas or creations have a life of their own, and the relationship with them I find far more problematic than simply participating in a process of creating them. Playing live is a treacherous experience. Ultimately this is a rock band, so it has to get it together live. It’s that trip down the lonely road…

As the recorded MS albums are based around improvisations, do you feel they represent a ‘period’ of your life or are they more representative of fleeting moments, experiences?
I would see them as experiences. I like to see them on a superficial level: the sound, the colour, the lines, the composition.  Do these experiences help produce new experiences?  Do they make you want to experience something new?

You mentioned that each recording is an experience. How would you describe the contrasts between the experiences played out in MA and Samantha? They’re both amazing records.
MA is our first record, recorded probably between 1994 and 1997, and it was done all over the place: inside bedrooms, rehearsal studios, different people’s houses, overseas in someone’s toilet, and with other people at times controlling the recording process, using different equipment and instruments and making spur of the moment decisions in the final mix, therefore leading to an album that is sprawling.  Samantha is just one two hour session at a rehearsal space when I had a bad case of sinus, so it was just quite mellow. Feeling sick played a part, so it’s important not to worry how we are feeling, but to instead go with that feeling and see if it bears fruit worth biting into. Do any of these experiences make you want to experience more, to explore further?  Samantha is a great example of this as the songs played live are radically different and have kept evolving. [That is where] the value is for us.

Playing live as treacherous, I like this idea – standing on an unsteady fence – it’s a very powerful image. How often do things go off the deep end in terms of control ?
Hahaha, control! There is some sort of control there, but what or who is controlling what and when? I’m not too sure. But when it’s a great ride, it’s a great ride! That’s what we are aiming for, to take a song somewhere it hasn’t been before, somewhere we haven’t been before…”the lonely road”. Sometimes it’s best when, on a whim, a song is derailed. The song is breaking down and being reborn all around you, leaving you with no idea of where you are going and no care: you are in the eye of the storm. It’s a fine line where this takes you, so the band has to be on a similar wave length, and even then you just don’t know, but on a good night the band will thrive on this.

What are your thoughts on being an artist working in Australia at this point in time? From a cultural point of view, do you feel facilitated and welcome here? Do you feel attached to any kind of artistic community?
Attached and lost consistently. It’s important for me to keep working on what it is and why it is that I desire.  Australia is fine for now, I don’t have too much of a problem with working here at the moment. There are many people around me who are a consistent inspiration, generous, supportive and helpful in many ways. There is so much more that can be done here while working with people and spaces overseas.

Do you know where you are headed in terms of personal creativity? Do you have an idea of what you want to do and where you want to go with it?
I’ve no idea where I am headed, the road to hell or the road to heaven? All I know is I need to “go go go!”

This interview was originally published on Angela Garrick’s Silver Video blog. Thanks to Daryl Prondoso for the live photo.